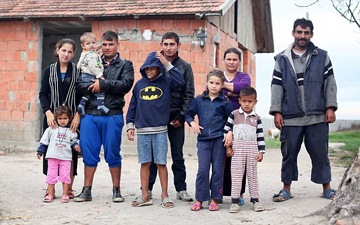 Excited and eager Britons are going to enjoy doling out some British hospitality to the millions of poor former Soviet bloc citizens from some of the most destitute EU areas in the early part of 2014.

With the NHS and schools already straining to support the mass open-door immigration policy under the previous Labour government, the next influx dictated by Brussels is estimated to be over 8-12 million people looking for benefits, free schools and free medical treatment in 2014.

Cream of the Crop

“Even though the mass influx of the poorest, most uneducated people will ensure the complete destruction of the NHS and benefits system, I welcome them to Britain so they can breed and breed and breed. We don’t need educated people coming here like doctors, lawyers and other professionals, we need goat herders, pickpockets, criminals and professional benefits cheats. Why should we adopt a system like Australia and New Zealand where one must have a profession and job lined up, as well as an ability to sustain one’s self financially? No, that is too logical, because we’re a tiny island with limited space and resources we must accept half the Third World and the poorest elements of the EU in so they can take all the benefits and increase crime, all of course because Brussels says we should,” Tony Alpine, a happy worker from the City told the Daily Mail.

Another eager Brit also explained his joy at receiving millions more poor, uneducated immigrants into the tiny British Isles: “It’s the done thing to do innit. We’re Brits. You know we don’t say anything. When they take all our medical treatment, take over our schools and destroy our benefits system, those who still have jobs in the UK must work harder to pay for it all. Stiff upper lip and all. Just think, out of every ten quid you make, eight pounds fifty will go to the tax man to pay for the immigration benefits and eco taxes. Oh, don’t forget the fuel duty as well, every pound you spend at the pumps, eighty nine pence of that is tax. It’s all going towards daily payments to Brussels and immigration. I love it and I’m going to work really hard at my job so that I get nothing back. Thank you. I am so happy now,” Norman Price, an accountant who earns over £70,000 a year told the BBC.