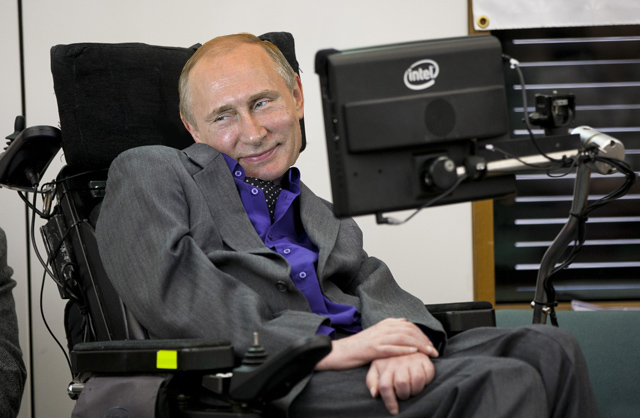 Yes, we all know the old saying of how there is very little difference between genius and madness, but could this be applied to Vladimir Putin? Certainly, he has been exhibiting some signs of unhinged behaviour of late, especially with his threats of nuclear action on Ukraine or anyone else that irks him, but is this truly the measure of madness?

Surrounded by ‘yes men’ Putin is an isolated figure and seems to have disappeared so far up his own arsehole he does not know what is right or wrong anymore or in what direction he should be facing. What Putin says, his ‘yes men’ parrot back to him, and he does not seem to have anyone around him with a grounding influence. In such positions of power, and ultimate control, it is important to have people around you that not only ground you but tell you the stark truth to keep you keeled in the correct direction. Putin at the moment really has gone “full Tonto” and is acting like a spoiled brat who has demanded something, but has not got what they wanted.

If Putin nukes his next door neighbour, does he not think that the radioactive dust will not land on Russia as well? He would have to be a fucking idiot or not care about his own people as well. One probably veers to the latter, because as he sits in his bunker deep under the Ural Mountains with his generals he is safe in the thought that the whole shithouse can go up in flames, and he will be safe — fuck everyone else.

Of course, none of this would be happening if Trump was still around, but just as the Russians have Putin, the West has Biden who has inflamed the situation to bursting point with not only his nonchalance but his idiocy.

One thing we now know about Putin is that he is a bona fide liar, and he lied that he was not going to invade Ukraine, and he lied about those ‘war games’ just being a little bit of harmless fun. This also shows he has zero respect for the West in its current state.

Is Putin a strategic genius or just a madman with his finger on the button? Maybe he is a bit of both, a schizoid psychopathic manic depressive with a very high IQ.

Putin needs to calm the fuck down and have another glass of Polonium. Another thing is that Putin is seriously losing face not only in the West, but amongst his own countrymen, seeing as his ‘crack troops’ have not even taken Kyiv yet. He stands to lose economically as well, and one would presume that many in Russia, even in his close circle, are thinking about bumping the fucker off once and for all. Putin and his Mafiosi oligarch friends may not be friends anymore, especially after he has been the cause of them losing billions of dollars.

As for this Orthodox Christian precept for war against the devilish West, well it is known that Putin is a religious zealot and thinks he is undertaking some sort of Christian crusade against a section of the world he deems satanic. Religion does crazy things to the mind, that is granted, and any evil action can be justified if framed with religious rhetoric. Putin is thus insane, because most heavily religious people are clinically unhinged individuals. If one has any form of logic, they do not base their actions on a fictitious book of myths where supernatural beings can walk on water or turn water into wine. We now live in an era where science is the true path of everything for some, and for others a book of fiction called the bible.