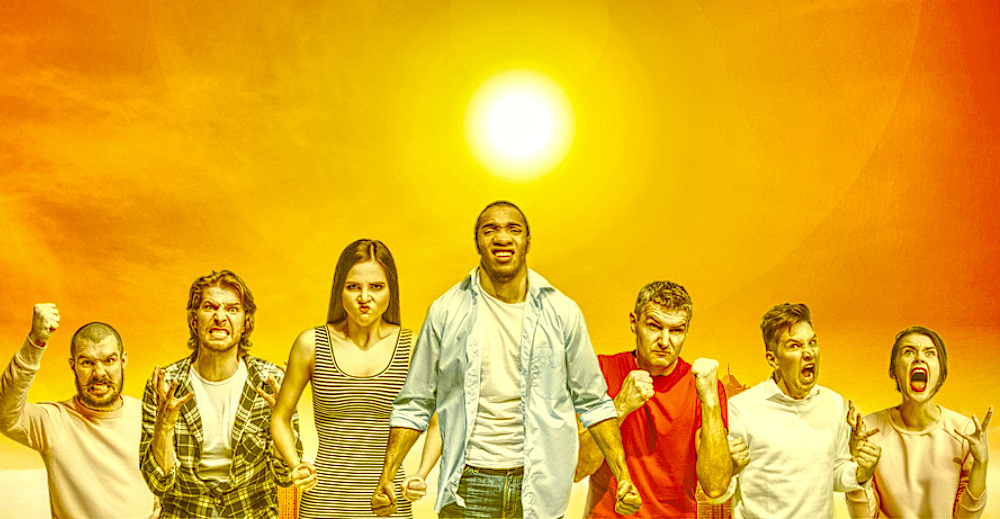 Usually the British summer weather is a deluge of wonderful rain, grey, miserable cold, but we are in the midst of a heatwave in relation to the type of weather we usually receive. For Britons, anything above 14c is a heatwave, so when it gets to 31c people start going fucking insane. This is when the animals come out to play.

Yesterday was such a day, temperatures not only reached way above 31c in some places, but tempers started to flare as well. The unusual heatwave saw incidents boil over, especially across the capital city, with violent incidents kicking off, road rage in melting traffic jams and punches thrown all over the fucking place.

“There’s something about the heat, innit? Makes peeps chimp out! Me and my crew were just chillin’ sniffing balloons in the Greenwich sunshine when it all kicked off!” one geezer revealed.

One would think going to a Z-list slapper’s birthday party would be a bad enough insult to one’s sensibilities or dignity, when you would be 100% wrong. Someone called Jesy Nelson, hosted a really classy event where groups of savage animals smacked bar stools over heads and whooped around making grunting noises whilst dragging their knuckles along the floor. The heat by this time was over 34c, and the booze and cheap drugs were obviously adding to the tragedy of the brain-dead congregating.

The violent insolent brutish behaviour did not end there either. Black Lives Matter advocate and race warrior, Lewis Hamilton ‘won’ the Grand Prix race at Silverstone by deliberately smashing his car into his rival, Max Verstappen, sending the ‘deserving white man’ to hospital. Whilst taking the podium on his poor-spirited cowardly ‘win’, Hamilton whooped with delight as Verstappen lay in a hospital bed.

Please bring back the shit British summer weather, so things can go back to normal.