Peaceful protesters in Lagos, Nigeria who were protesting against the police brutality of SARS (Special Anti-Robbery Squad) were met with even more police brutality as live ammunition was shot at them killing many where they stood.

There does not seem to be any reasoning with President Buhari who has not even acknowledged that his forces had opened fire on innocent protesters.

Protests began nearly two weeks ago with calls for the SARS police unit, which had been accused of illegal detentions, assaults and shootings, to be disbanded.

But the demonstrators called for more changes in the security forces as well as reforms to the way the country is run. It is suspected that many of the SARS police have simply been reassigned to different units, and nothing has changed.

Unrest in Nigeria could spread to other African nations where the populations are constantly brutalized under militaristic leaders.

These protests are similar to the protests in the USA, and Europe, and constitute an awakening of the populations to their treatment at the hands of police forces.  As populations across the globe, especially in developing nations increase, there will be more unrest. 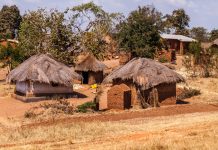