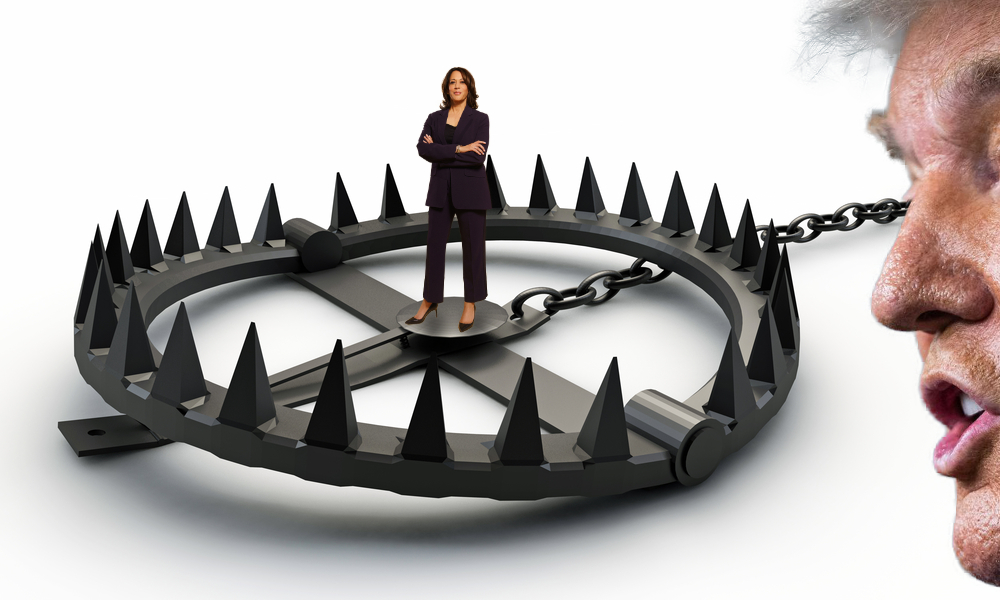 You have to hand it to the clever people behind the Joe Biden campaign for presidency, they are doing their best to lay a Trump Trap, and encourage the president into attacking their newly appointed bait, Kamala Harris, Biden’s running mate for the November election.

There are a lot of female votes out there, and a lot of female African American voters who will be voting Biden as soon as they can, especially if there is any nastiness thrown from Trump.

“Trump can’t win our ace in the pack. If he says one word against Kamala, he is either a racist, or a chauvinist pig, or both. Many African Americans do not have a sense of humour any more and any form of criticism whether deserved or not means that the race card is pulled out. It’s the same thing with American women these days, black or white, the feminist card is another gauntlet that Trump will face. These days, even the slightest criticism of a feminist ’empowered’ woman will bring down hellfire from all quarters, that not many survive from. We’re talking mob rule by the sovietized Marxist automatons who we have indoctrinated so intensely, they do not and cannot see any other viewpoint, which intriguingly brings us onto our Democrat designed Cancel Culture. They will cancel Trump, and he may very well fall into their trap, hook, line, and sinker!” a prominent Democrat operative on Capitol Hill boasted.

So, what is the Teflon Don going to do now?

Being polite and gracious to this female bait could possibly have the Democrats tearing their hair out at the roots. To act in the opposite manner than expected would really put them off base. It is however unlikely that Trump would follow such action, as he is known to spit out whatever pops into his head at any time.

Additionally, just as there are in equal measure socialist Democrat women, there are Republican women, who are predominantly white, and would be weary of an African American woman superseding them purely on affirmative action terms and a cynical ploy to appeal to African American voters.

It is very doubtful that Biden will survive another four years, especially as his cognitive abilities are at such a low level. Why should the first female president be black, many white women across America will say to themselves? What? Just because of affirmative action and ‘woke’ culture? Race is such a divisive element of American culture and politics that it is a curse that will never be lifted. Too much water has already passed under the bridge of history, years of pain and hatred, embedded, ingrained in the very fabric of America as a country.

This whole imbroglio is a quantum mess and who is to say if the Trump team have an adequate answer to any of it?

We leave you with a satirical poem, kindly submitted to the Daily Squib by Professor Richard E. Vatz.

There’s the peacock-proud MAGA hatters who never question Trump,
And Never-Trumpers who would vote for any kind of lump;
All people who see politics from a single jaundiced side
Who cannot grant a single point and say all their foes just “lied”

There’s “woke” actors and actresses who abjure the “actress” tier
And Hollywood predators who freely pinch a rear;
They all know that their left or right is simply right at that
But they are losing their audiences who see that they’re nothing but a brat

For all of them deserve to be put upon the list
For none of them be missed; I’m sure they’ll not be missed.

There’s the pestilential candidate who must have your money now
Who are up against a made-up deadline if not met will have a cow;
And they always say their opponents are made rich by evil donors
When their own supporters turn out to be even wealthier big owners.

And finally there are the Coronavirus experts who pontificate each day
With their dire forecasts or reassuring predictions that never go away;
They are sure as sure can be as to where the scourge is headed
But there are always states and countries whose facts leave the “geniuses” quite shredded

I’ve added them all to my ever-expanding list
I know they’ll not be missed; there’s no way any will be missed.

Professor Vatz is Distinguished Professor at Towson University and Author of The Only Authentic Book of Persuasion: the Agenda-Spin Model (LAD Custom Publishing, 2019) ) and the co-editor of Thomas S. Szasz: the Man and His Ideas (Transaction Publishers, 2017).