The unnamed TSA agent taunted the woman about where he had stuck his fingers during his eight hour shift and forcibly wafted his stinky finger under her nose.

“I was a witness to the incident and am as traumatised as that poor woman. It must’ve stunk bad because she recoiled back and started retching like she was going to barf,” a shocked witness at the airport check zone told reporters.

Another outraged passenger said: “Not only do these animals violate your Fourth Amendment rights but they’re spreading all sorts of diseases and bugs around by touching multiple crotches and butt cracks without changing their gloves. I seen some of them don’t even wear gloves, and yet they put their hands down people’s pants.”

The woman who had her nostrils violated by the TSA agent was told afterwards that there was nothing she could do about it, and she was told to get on her flight to Fort Lauderdale and “shut the f*ck up with the whining already”.

The case is ongoing. 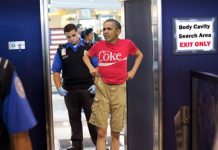 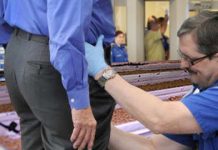