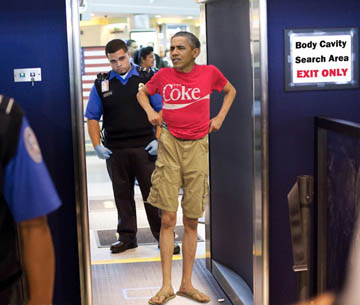 The former president touched down at O’Hare airport at 04.30 this morning but was refused entry into the United States based on reports that he is a practising Muslim.

TSA officials immediately encircled the former president and told him to go to a separate room for an internal body search and questioning.

“If he is a Muslim he could have stashed away a prayer mat or Islamic beads. We found a Quran in his hand luggage. The former president was given a full body search including his entourage. Michelle Obama was found to be hiding other objects on her person of which we cannot reveal as to their sensitive nature,” TSA spokesman, Arnold Felch told Fox news local.

The former president who had just arrived from vacation in Kenya was aghast at the new regulations brought in by new president, Donald Trump and called the ban on Muslims as unconstitutional.