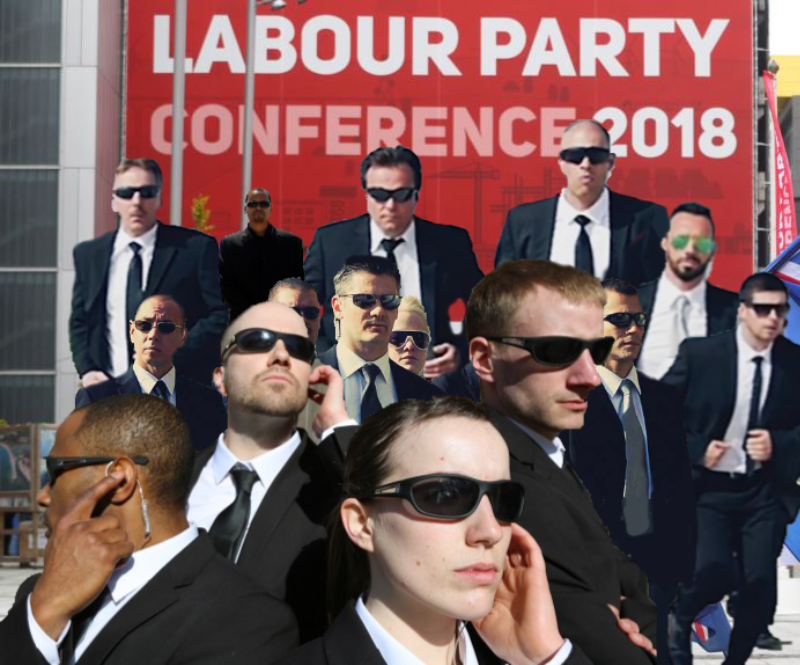 The last remaining Jewish MP in the Labour Party after an anti-semitic purge worthy of Stalin and Hitler has taken its toll, arrived at the conference hall this year with a bodyguard troop in tow.

“Because of the danger of violence and aggression towards my person as a Jew within the Labour Party, I have been forced to hire over 200 bodyguards for today’s conference. My team are dedicated to stand up for our rights, as Jews, to attend and be members of this party without racist and anti-semitic discrimination,” Gina Horovitz, Labour MP for South Grinstead, told the conference before a number of Momentum members started shouting racist abuse at her.

After the brief speech by the Jewish MP, she was rushed off stage by her bodyguards and taken to a secure room where she watched the rest of the conference from a screen.

Labour has been embroiled in an anti-semitic argument for months now, as party leader, Jeremy Corbyn was shown to openly support terrorist groups and in no uncertain terms deny the right for Israel and Jews to exist.

“Comrades, I have been asked to talk about Jews and Israel (cough). My friends in Hamas, and Al-Aqsa Martyrs Brigade all tell me that I am doing the right thing. They even sent me a complimentary suicide vest so that one day I may use it on myself and become a martyr to the cause. I would like to reiterate to all the press and people who say I am anti-semitic, I say no, I just don’t believe Israel should exist and that all Jews should disappear off the face of the earth.”

It may be ok for Jeremy Corbyn, who does not need a bodyguard, but for others, like Jews, the story is very different.