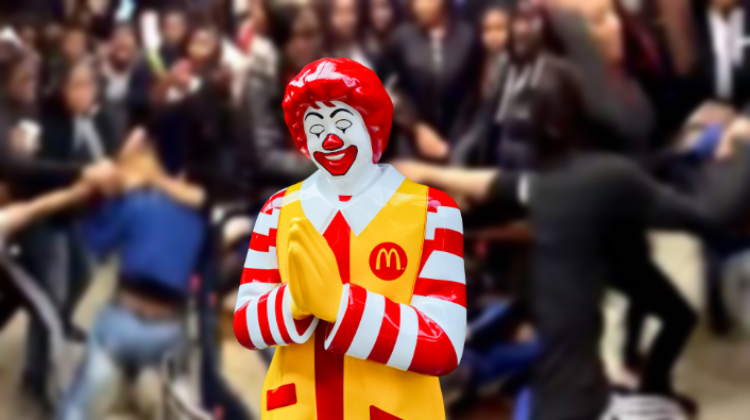 There’s something about McDonalds which brings forth the beast in the great unwashed masses.

Not only does the fast food restaurant feed the people with their daily mush, it is a conduit for extreme violence, most of the time highly entertaining gladiatorial combat that ends up  on YouTube.

Over the years the restaurant has tried to clean up its image, and has refurbished their restaurants to try to appeal to a better clientele, however this has mostly failed because the food they serve only applies itself to the lowest common denominator.

Processed shit for the Untermensch is a big money maker, and there will never be any escape for the company in this respect.

The only solution obviously is to put armed guards in every restaurant outlet. This way, when the ratchets start their screeching and hair pulling, and the gang boys start their fist fights, there could be a lot of tomato ketchup splattered all over the walls as the armed guards let loose. McDonalds employees beating customers with their fists, although entertaining, is less effective than guns.

Amongst the wreckage, the discarded hair weaves, the ripped thongs, the McDonalds sign shines down from above, an unholy reminder that in satan’s kitchen, money is made despite the brutal violence. Business carries on as they mop up the shit and the blood from the floor and walls. Cha ching!