“We could have built this thing anywhere else, but we decided to just build it right on the beach so that it would be exposed to any danger that came from the sea like tsunamis and storms. Forget about building it on higher ground or inland, we said f*ck it, let’s build a major nuclear facility right next to a fault line,” Ichiko Muyumi, one of the engineers who planned the building of the Tokyo Electric Power station in Fukushima.

In what has been dubbed as Japan’s own Pearl Harbour, the tsunami caused immense devastation, damaging thousands of properties and buildings in a surprise attack that took many off guard.

“The waves were 20 metres high and the water swooped over the buildings taking everything in its path. Huge walls of water came out of nowhere like zeros plunging from the clouds, and caught us completely by surprise,” one of the survivors of the tsunami, Yoriko Jintai, 23, told CNN. 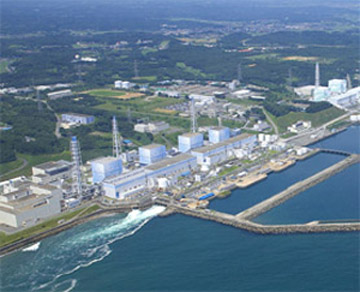 It may have a pleasant sea view but is this responsible building?

If the reactors explode in the nuclear plant, there would be more devastation as the radiation is spread across the atmosphere.

It seems the double blow from mother nature and now the nuclear reactor meltdown is a very sad state of affairs in an already harrowing situation.

“I have to congratulate the chap who thought it would be a great idea to build a nuclear power station exposed to the elements like that. I mean what in hell was this guy thinking?” another glowing in the dark tsunami survivor remarked from a shelter 50 kms from the destroyed town of Sendai.