The terrible events in New York where a crazed Jihadi mowed down eight cyclists with a hired truck whilst yelling Allahu Akbar, has caused many vigilant New Yorkers to find alternative means of walking or cycling.

“You can’t walk on the sidewalk (pavement) you can’t cycle in cycle zones? You see this pogo stick? This thing can jump above anything comin’ at you at 70 MPH. I just do a big jump and I’m up nearly seven feet off the ground,” Manuel Torres, a regular commuter who now pogos 18 miles to work and back every day.

Alison Mulnick, 23, is a courier for a firm in Queens, but instead of cycling to jobs, she now uses stilts which increase her height to over 15 feet.

“If I see a crazed Jihadist ISIS guy with a beard and yelling all that stuff, I just jump up high on my stilts and catch a road sign, lamp post or jump through a window. You can also just spread your stilts so the vehicle passes through no problem.”

These brave vigilant citizens of New York do not bow down to terror, they improvise, and this is what is going on.

Dan Monroe, 18, is a real technical whizz kid, and has improvised some rollerblades to accommodate mini jet engine fixtures.

“I can accelerate from 12 MPH to over 125 MPH in less than 1.4 seconds. That way, any sign of trouble and I’m outta there. I have to say I got the idea from a Roadrunner cartoon, but this shit actually works. The only problem is there are no brakes.” 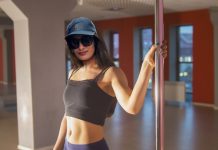