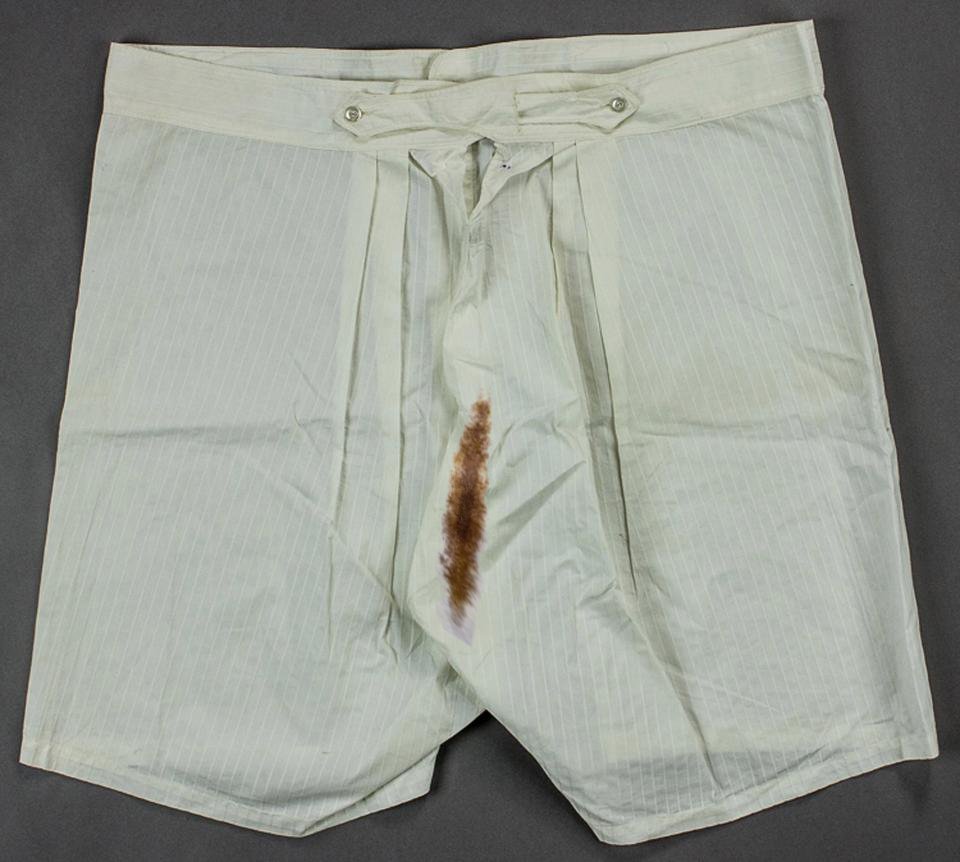 The brutal dictator Hitler’s briefs, which have a ‘surprisingly large’ 39-inch waist and are initialled ‘A.H.’, were left behind in a suite at the luxury Parkhotel Graz in Austria after he stayed there in December 1941.

The Führer had been staying in the hotel when he heard the news of Germany’s defeat at the hands of the Russians during the ill-fated Operation Barbarossa invasion of Russia.

Auctioneer Ronnie Papadapadapapoulos said he believed the underwear was sent to the hotel’s laundry department but were rejected and were only returned after Hitler and his entourage had checked out in a hurry.

The seller was the grandson of the hotel’s owners at the time.

Ronnie, who owns Bilko’s Historical Auctions in Takoma Park, Maryland, where the 19-inch long white linen shorts sold for $6,737 (£4,991) to a private buyer, said they were in ‘pristine shit stained’ condition.

He added: “People were flocking to this Adolf Hitler underwear like bluebottles to a freshly laid steamy doggy turd.

“This is a very rare item, I mean it’s gotta Hitler shit stain directly down the back. People can actually smell it even after all those years.

“They were retained in the family who owned the hotel, which is very prestigious, for almost 80 years, and when we got them they were wrapped in tissue paper in a box. The smell is still slightly there but over time it has faded. Nevertheless, it shows that Hitler was just a human, he shit his pants when the Russians pushed the Jerries out of Russia.

“It’s a fascinating thing. It’s as close as you can get to Adolf Hitler, literally.”

Ronnie, 58, who ruled out selling the shorts to any member of the political far right before the auction, added: “I imagine the buyer would probably frame the shorts. It would be the most talked about relic in the house.”

Hitler stayed in the hotel a week before Germany was pushed out of Russia with a terrible defeat for the German army and Ronnie believes Hitler was touring the country ahead of returning to his retreat in the Bavarian mountains to lick his wounds.

The item’s description read: “A monogrammed pair of Adolf Hitler’s striped white linen under shorts with a 12.5 inch skid mark in the back. The shorts are surprisingly large – 19-inches long, with a waist of about 39 inches.”