He’s usually trying to dig up some nonsense on the ailing president regarding his absent birth certificate, but this time the tables have turned on Republican Tea Party hot head Glenn Beck.

“We dug deep for this one, and it turns out that Glenn Beck was not only born in Helmand province, Afghanistan, but his roots lie with the Taliban. His dad was a prominent Taliban commander who sadly passed away last year during an American air raid, and his momma was a towel head too. In his spare time, Glenn Beck prays to Allah and wears a turban at home. He even arranged his furniture to point towards Mecca so he can be close to Allah at all times. The bitch has been holding out on us for this long,” Rudy DuMaurier, a senior Tea Party chairman from Boston, Massachusetts told a US military tribunal on Wednesday before expelling Mr. Beck from any further Tea Party conventions.

When news of Glenn Beck’s real identity was broken to America via Fox News, there was shock and grief across the country.

“Goddamn! You saying that he’s a towel head too? What next you’ll be tellin’ us that he wants to build a mosque at the foot of the statue of Liberty. What a load of prime, steamin’ BS,” John Deansguard, a fireman from Chisholm Creek, Wichita told CNN. 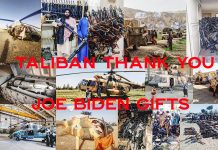 The Happy Happy World of the New Taliban 2.0