Ms Winfrey was arrested late yesterday
evening in the world famous Harpo studios where she films her Oprah series.

“We have detained Oprah Winfrey on suspicion of passing US recipe secrets, celebrity gossip and sob stories featuring disadvantaged families to the Russians. Things like how to make a great Pecan pie, and what Tom Cruise’s pre-show scientological exercises are. Ms Winfrey was arraigned today and will be held at an undisclosed location until we review her case,” Special agent Dean Cloggs, of the FBI told CNN.

In a statement, the US Department of Justice said that Oprah Winfrey had been living under an assumed name. Her real name is Ivana Tolstak and she hails from Kozhukhovskaya, a Moscow suburb. According to FBI files, Ms Winfrey also drinks copious amounts of vodka everyday and it is this trait that gave her away.

“We just followed the vodka trail and it led straight to Oprah. I’m not shitting you, she downs about two or three bottles of Streletskaya a day. She was caught covertly relaying sensitive information to Russian agents with the use of advanced steganography software to encrypt messages and hide information on public websites. Our agents also uncovered notes on how to interrogate her celebrity guests on the shows and don’t forget the cash we found in her luxury apartment. Yes, we found over $500 million in cash stuffed under her mattress along with launch codes for US silos holding nuclear missiles all over America. Dang, it’s a good thing we got to her before she caused all out war,” Mr Cloggs said.

Millions of Americans were in mourning today after the terrible news was revealed: “I can’t believe she was a Russkie spy. Hell, she was so nice and loving. Every day I’d watch her shows. If she’s a traitor, they should put her in an electric chair on her own goddamn show. God bless America,” long time Oprah fan, Amy Lou Dumper, from Chicago told CBS. 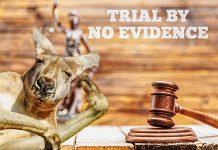