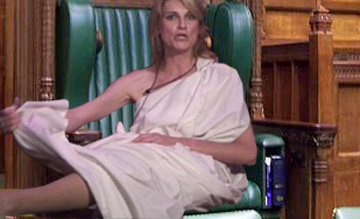 Let us read from the official website www.parliament.uk where it states quite clearly:

Speakers must be politically impartial. Therefore, on election the new Speaker must resign from their political party and remain separate from political issues even in retirement. However, the Speaker will deal with their constituents’ problems like a normal MP.

And from here, let us go to the current House Speaker, John Bercow’s little tirade against the newly elected president of the United States, Donald J. Trump.

“Before the imposition of the migrant ban I would myself have been strongly opposed to an address by President Trump in Westminster Hall,” Mr Bercow told MPs.

Parliamentary insiders have revealed some wonderful news, that this impartial imposition on Britain’s greatest ally could mean the end of Bercow as House Speaker. Rumours have it that his extreme left wing whore wife is the author of this mess, and has pushed her ‘impartial’ husband to deny Trump his day in parliament. If this is the case, the House Speaker has crossed a line from which he cannot recover.

Bercow, has of course many enemies in the Commons, particularly within the Tories, and they are now waiting for the moment to stick their daggers into Bercow’s back and finish him once and for all.