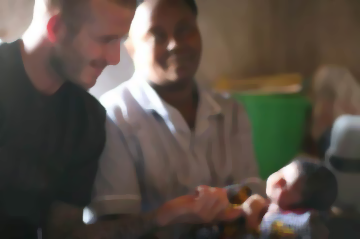 Whilst pretending to care about talking to African kids on a football pitch in the Sudan, or whatever other place the photoshoot was set up, Beckham only had one thing on his mind — a Knighthood from the Queen.

This despicable poseur and illiterate boy-voiced babbler from Chingford is a prime example of what is wrong with celebrity culture, an insipid pit of detritus that sometimes reveals everything it is made up of to the public.

Yes, sure, hackers are not the cream of the crop too, but in this case they have come on top. By revealing Beckham to be what he really is, light has finally broken through the darkness of secrecy and lies portrayed by egotistical rats like Beckham, a shameful disgrace to humanity and ‘charity’.

In one message the 41-year-old former England captain branded the Honours Committee “unappreciative cunts” after missing out on a knighthood in 2013 and dismissed lesser awards, ranting: “Unless it’s a knighthood fuck off”.

David Beckham, you are a despicable, useless excuse for a human being and you do not deserve even one crumb of mercy for your lies. Let us hope this is remembered to your last days and you are struck off from UNICEF.