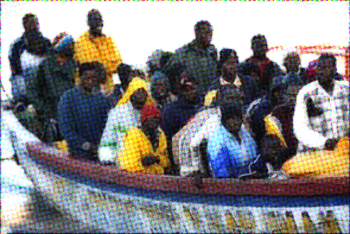 “We have detained a group of sixty immigrants who were trying to escape Britain,” Deputy Secretary of Immigration, Dean Ross, told the Daily Mail.

The immigrants, who were all receiving state benefits, said that conditions in Britain were so awful that they were trying to flee to the war-torn West African country of Angola.

One of the immigrants pleaded with the Home Office to let them go: “We are begging the Home Secretary to let us go. I would rather live in a war-torn poverty stricken country than in Britain. We just want to go back to our homeland away from this awful miserable place.”

The immigrant detainees rioted after they were told that they would have to stay in the U.K but order was restored after promises by the Border Control that their case would be reviewed in 6 years time.

Until then they will be detained in Dagenham, North East London.