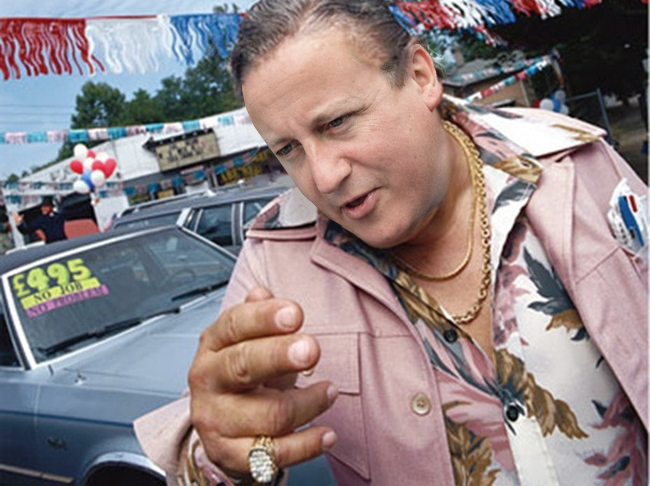 ‘He still claims that Turkey won’t join the EU while his Government is spending £1 billion to help speed up their membership. The truth is you can’t trust anything David Cameron says on the EU. That is why you should Vote Leave on 23 June.’

David Cameron is misleading the public when he says he is putting an additional £12 billion into the NHS. This was a lie.

The Government has only committed to spend an additional £8 billion. The Chancellor of the Exchequer, George Osborne, said: ‘we will commit to a minimum real-terms increase in NHS funding of £8bn in the next five years’.

The Government will not even meet this target. In December 2015, the Nuffield Trust, the Health Foundation and the King’s Fund said that health spending in England will rise by just £4.5 billion in real terms between 2015/2016 and 2020/2021. This is because health spending not included in NHS England’s budget will fall by £3.6 billion, despite NHS England’s budget being protected. The organisations stated the real terms increase was ‘clearly much less than was expected when the NHS settlement was announced‘.

David Cameron claimed he got what he wanted on benefits. This was a lie.

The 2015 Conservative Manifesto stated ‘We will insist that EU migrants who want to claim tax credits and child benefit must live here and contribute to our country for a minimum of four years’. Migrants will still be able to claim benefits during their first four years in the UK.

The Conservative Manifesto promised: ‘If an EU migrant’s child is living abroad, then they should receive no child benefit or child tax credit, no matter how long they have worked in the UK and no matter how much tax they have paid’. The export of child benefit will continue after his deal.

David Cameron claimed EU jobseekers must leave after six months. This was a lie.

The Prime Minister promised that all jobseekers would be removed after six months and has claimed this has already been achieved. In 2014, David Cameron promised that: ‘[I]f an EU jobseeker has not found work within six months, they will be required to leave’. In his Chatham House speech in November 2015, the Prime Minister said that this pledge had ‘already been achieved’.

The EU Treaties forbid the removal of all jobseekers after six months. In 1991, the European Court of Justice ruled that the Treaties forbid the removal of jobseekers from another EU member state regardless of the duration of their stay if ‘the person concerned provides evidence that he is continuing to seek employment and that he has genuine chances of being engaged’.

There is no mechanism for monitoring whether or not jobseekers remain in the UK for over six months. In any event, EU law forbids systematic verification of whether EU citizens are lawfully resident in the UK. It states that ‘this verification shall not be carried out systematically’.

David Cameron claimed he had a deal to deport foreign criminals. This is a lie.

We are not able to deport EU criminals because of EU free movement rules. David Cameron was actually referring to the EU’s prisoner transfer agreement – this has been a failure. The number of foreign nationals offenders from the EU has increased since it came into force. This costs us over £150 million each year.

In November 2008, the EU established a prisoner transfer agreement, which allows for the transfer of prisoners to serve their sentences in their country of nationality without their consent. This entered into force in December 2011, but is yet to enter into force in respect of transfers to certain member states such as Poland. The Government has claimed that: ‘the EU PTA will result in a significant increase in the number of prisoners transferred’.

Just 73 prisoners have been transferred under this agreement according to the Government.

Cameron claims he got a substantial renegotiation. No powers will be brought back by his deal.

The Decision states that: ‘The competences conferred by the Member States on the Union can be modified, whether to increase or reduce them, only through a revision of the Treaties with the agreement of all Member States.’ Since there will be no Treaty, no powers will be returned to the UK.

Before the agreement, the EU had 28 legislative competences over the UK. Today, it still possesses 28.

The Decision states that it respects ‘the powers of the institutions of the Union, including throughout the legislative and budgetary procedures’. This makes clear the Decision will not affect the EU’s powers to legislate for the UK or to demand £350 million per week from Britain.

David Cameron’s deal failed to return powers. These include:

Cameron claimed GDP was the key measure of political success. He has previously rejected this view.

In 2010, Cameron has said ‘GDP is an incomplete way of measuring a country’s progress‘.

The UK has no influence in the EU institutions which are unaccountable to the British public.

Every time the UK has voted against a measure in the Council of Ministers, it has been outvoted. This is happening with increased frequency: of the UK’s 72 defeats, over half (40) have occurred in the last five years.

The UK’s representatives are often outvoted in the European Parliament as well. The majority of UK MEPs voted against 576 EU proposals between 2009 and 2014, but 485 still passed.

Research for the House of Commons Library shows 60% of UK law is made in Brussels.

An Australian-style points system will make it easier to recruit skilled staff.

11% of doctors are from the European Economic Area, whereas 25.7%, or 70,404 are from the rest of the world. This is despite the stringent restrictions that apply to migrants from outside the EU coming to the UK.

If we Vote Leave, we can prioritise those with the skills our NHS needs and we can end the open door to the rest of Europe.

The NHS is under major pressure from immigration.

David Cameron used to admit you could control immigration without harming the economy. He was right.

A report for the Institute and Faculty of Actuaries shows that introducing an Australian-style points system and reducing migration would bring billions in additional revenue and lead to a higher state pension.

Cameron has broken his promise to fix free movement and to cut migration to the tens of thousands. He failed.

In his 2014 conference speech, Cameron said: ‘Numbers that have increased faster than we in this country wanted at a level that was too much for our communities, for our labour markets. All of this has to change – and it will be at the very heart of my renegotiation strategy for Europe.

The 2015 Conservative Manifesto promised to ‘keep our ambition of delivering annual net migration in the tens of thousands, not the hundreds of thousands’.

EU migrants can come without a job offer, despite David Cameron’s promises he would end this.

As early as 1991, the European Court held that the ‘Treaty entails the right for nationals of Member States to move freely within the territory of the other Member States and to stay there for the purposes of seeking employment.

Cameron claimed that proposals on ‘ever closer union’ will have an impact. This is wrong.