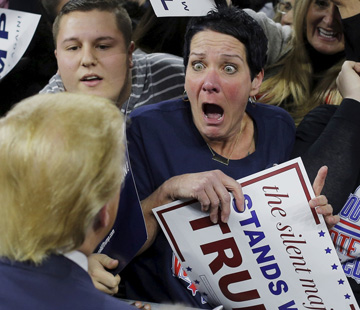 Ever the narcissist, Donald Trump loves his rallies. This is where he gets to talk to the wild-eyed brainwashed citizens he dupes with false hope, promises he will never keep and utter lies that drop out of his gorilla lips like a festering turd from an old man’s diarrhoea soaked underpants.

“I’m selling these people hope. Look at them, they adore me. I could tell them anything and they would believe it without question. Not one question comes from their poor mouths. These fucks. Backstage, we laugh so hard. I put one up on these poor hypnotised morons, and they eat it up like it’s a filet mignon from my bankrupt Trump steak house. To tell you the truth, I feel nothing but pity for them, they ain’t got no money, they smell, and I hate poor people. You know poor people disgust me. If it were up to me, I would have all these people in the crowd taken to a farm and processed. Hey, at least we could make some fucking money off of them then. Sure, some of them pay taxes, but it ain’t enough. Fleecing these poor bastards has been the easiest job I ever had. Pack ’em in, pack ’em in, roll up you chumps, eat up the Trump. I hate ’em,” a disgusted Trump was overheard telling one of his aides on Tuesday.