Some of the key points that signal the rise in Tescoism are:

2. Disdain for the Recognition of Non-Tesco Products: Because of fear of enemies and the need for security, the people in Tesco regimes are persuaded that all products from other supermarkets can be ignored in certain cases because of “Tescoistic need.” The people tend to look the other way or even approve of more Tesco stores, increased Tesco mini stores, assassinations, long incarcerations of shoppers in Tesco stores, Tesco tax avoidance etc.

3.  Identification of Non-Tesco Enemies/Scapegoats as a Unifying Cause: The people are rallied into a unifying Tescoistic frenzy over the need to eliminate a perceived common threat or foe: other supermarkets, local bakeries and grocers; farmers; local industry; choice, non processed quality food producers, etc.

5.  Obsession with Tesco Security: Fear is used as a motivational tool by Tesco over the masses.
6.  Greed and Tesco are Intertwined: Supermarkets in Tesco nations tend to use the most common religion in the nation as a tool to manipulate public opinion. The religion of Tesco is greed, therefore the use of greedy rhetoric and terminology is common from Tesco’s leaders, even when the major tenets of their greedy religion are diametrically opposed to the supermarkets policies or actions.

7.  Tesco is Protected: The industrial and business aristocracy of a Tescoist nation often are the ones who put the Labour government leaders into power, creating a mutually beneficial business/government relationship and power elite.

8.  Labour Power is Suppressed: Because the organizing power of labour is the only real threat to a Tescoist government, labour unions and workers rights are either eliminated entirely, or are severely suppressed.

9.  Disdain for Intellectuals and the Arts: The Tescoist Reich tends to promote and tolerate open hostility to higher education, and academia. It is not uncommon for professors and other academics to be censored or even arrested at Tesco stores. Free expression in the arts is openly attacked, and Tesco regimes often resort to promoting utter pap and banal mediocrity dedicated to dumbing down the masses.

10.  Rampant Cronyism and Corruption: Tescoite regimes almost always are governed by groups of friends and associates who appoint each other to high positions and use Tescoistic power and authority to protect their friends from accountability. It is not uncommon in Tesco regimes for national resources and even treasures to be appropriated or even outright stolen by Tesco leaders. 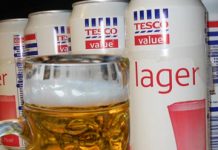 There’s Some Bad News About the Tesco Value Beer As Well.. 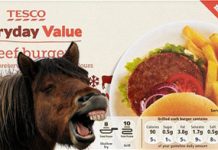 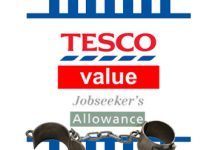