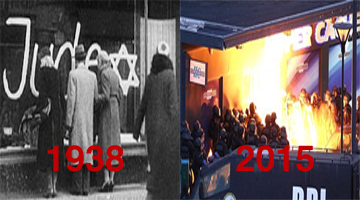 Jewish people are a valuable commodity in any society, they are generally hard working, peaceful and contribute greatly to all facets of life.

It is a sad day to see them once again leaving Europe, where the climate of fear and religious hatred is rising daily.

With the influx of many from the middle East and ISIS threats, Jews are once again finding themselves on the wrong side of the tracks but this time at least they have a homeland to flee to.

Israel may be just or even more dangerous but it’s a land Jews can call home unlike European countries which offer little or no protection to their citizens.

Shut up shop, pack those bags, make the exodus far from the shores where you grew up, a sad day to behold. Jewish leaders are advising the exodus of Jewish people, because things will only get worse, as long as we have EU leaders like we have today, this certainty is assured.

Mainland Europe is worse off than Britain, but the UK will most probably deteriorate further if Britons vote to stay in the EU. There will be a marked increase in refugee quotas and no one will be able to refuse EU technocrats.

The increase of extreme Islam and Far Right Nazi groups is now putting major pressure on Jewish communities across the continent to find safety elsewhere.

In five years time, Europe will be unrecognisable, the number of ghettos in cities harbouring disenfranchised marginalised peoples will rise, there will be violence at every turn, wars in the streets as factions vie for overall control, and the people keep streaming in.

Under Merkel’s watch an estimated 45 million extra refugees from Islamic countries are to be distributed across Europe, but this is the tip of the iceberg, the numbers coming over are already unaccounted for, some of these people disappearing once across the porous borders, making their way through the Schengen zone with ease.