If you are stupid, you are actually clever, a new study funded by the George W Bush Scientific Research Institute in Washington has concluded after 15 years of gruelling research.

“Over 15 years, we included data from over 50,000 subjects of all age groups and demographics. There was a distinct correlation of research data collated within the time period that suggested to our team that the stupider the individual the cleverer they are in real terms.  For example look at one of our prize test subjects, McCain VP pick, Sarah Palin. Our research concluded that what she says may seem totally stupid to everyone else on the planet, but she may be operating on a plane of thought which is actually in league with the great thinkers, she is the Einstein of Alaska, a true genius in her own right,” Professor Al Hertyu, the senior research scientist for the project concluded.

Palin who was cited as being “so stupid that she is actually incredibly intelligent” is one of the high-profile subjects on the researchers’ list that has made the headlines.

George W Bush’s intelligence level has been compared to an “aphid” by some commentators, however, researchers for the study were astounded at the president’s high IQ results and cognitive skills.

“We tested the president with the use of banana treats. If he got a question right he would get a banana thrown into his cage. We were astonished to see a marked improvement in his skill levels on mathematical tests when he was rewarded for the correct answers. By the end of the first session with Bush he was completing multiple equation exercises and complex trigonometry. He could not string a coherent sentence together however and we are still working on that,” the professor added.

Out of all the nationalities tested, Americans came out on top for all the tests. There were high marks for stupidity with all American subjects mainly due to the dumbed-down culture of extreme stupidity that pervades their nation. The level of stupidity was at times so high amongst Americans that the team had to design specific tests solely for this group.

The team thus deduced that Americans were so stupid that they were actually clever in their stupidity. After all, they voted George W Bush into office not once but twice, and you can’t get more stupidly clever than that can you? 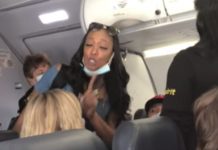 Queen of California Dominates From Cattle Class on Airline

COVID-19: Spare a Thought For the Clueless Obese Drugged Up Americans