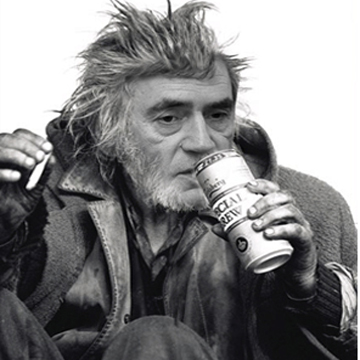 We like to visit past luminaries of British politics now and then, and this time we’re back in Kirkcaldy, Scotland, a place dear to Gordon Brown.

We find the former leader round the back of a kebab shop where he indulges in some scraps and sometimes even gets a full doner from the owners.

DS: Gordon, nice to see you. You’re looking well. I can see you’ve found a new jacket since we last met and even had a shave.

GB: Eeeeeargh! Sum cunts nicked me last brew! Betta have some booze on ya?

DS: Four cans of brew for you Gordo, your favourite.

GB: Aaaah! Happy as Larry! (click sleurp, Gordon tucks into the first can)

DS: So have you been watching the news, since you were thrown out of Number 10, things have changed a bit?

GB: Ah watch a bit on the High Street, Curry’s is good. The scum Tories are in noo, and that Corbyn fellow he’s takkin’ ma job. I saw that lil pip squeak Ed tried to win but voters saw through him. I nevah won an election meself so I know how he feels. Bashtards the lot!

DS: During your reign you ruled with an iron thumping fist, I see you still have that angry bitter quality lingering.

GB: They never appreciated me. What I did for the country. Burn, burn, burn in hell! Is there for honesty poverty That hings his head, an’ a’ that; The coward slave – we pass him by, We dare be poor for a’ that!

DS: I have a message from Darling here, he says that he is sorry the way it turned out for you since Sarah threw you out three years ago he’s offering you a space in his barn. There will be straw and warmth away from the cold plus a few drams here or there.

GB: Tell him his kindness is not needed. Ahve got the freedom o the road here.

DS: The Daily Squib readers have scraped a few pennies together to give you. Here is 43 pence. You can maybe put it towards a hot meal or maybe some more booze.

GB: Takk yer money n shove it up yer arses! The Daily Squib? You twits gave me nuttin’ but grief during my days as supreme comrade in chief. I should have had you all shot! Thash what Stalin would have done. On second thoughts I’ll have that. (grabbing coins violently) Now leave me be ya basts. Yaaargh!

And with a smelly flurry, Gordon left us, his destination of who knows where beckoning, but a legend in his own frazzled mind.