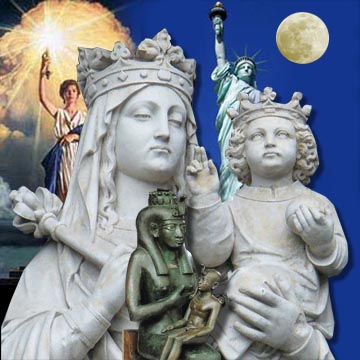 Professor Dean Perry, a senior fellow working at the Institute of Ancient Research in Denton, Ohio has delved into the recent horrific offering from ISIS.

“Semiramis, Mary, Diana, Ishtar, the image of the mother and child, Isis, Horus. The symbolism is all too apparent, as the Roman Catholic church adopted Semiramis (Mary) and Tammuz (Jesus) into their rituals in the 5th Century. The Israelites knew her as Ashtarte, mother of Baal.

“Allilah, Allah, Venus, Diane she is the eternal mother and the symbolism for Semiramis can be found everywhere. From the Catholic churches across the world to the obelisks and statues in major Western cities, to the depths of the Parisian city tunnels.

“People have a misconception that the Islamic star depicts the sun, when in fact it depicts Venus, and there we have Semiramis. The crescent and star adopted by Islam came from Sumer and ancient Israel, the Moabites, the Babylonians. Byzantine and Roman coins depicted the crescent star way before Islam. ISIS on the other hand have not adopted the crescent and star symbol but have instead gone for an air of authority by emblazoning the words La ‘ilaha ‘illa-llah – “There is no God but God” which were the words used by the Islamic prophet Mohammed as a seal on his letters. The acronym ISIS however is a major clue to the workings of this group.

“The ritual sacrifice conducted and released by ISIS on the 3 February 2015, a full moon, is indicative of some form of occult working. Whoever is orchestrating the ISIS show is possibly party to ancient knowledge not freely available to the public. There are little clues here and there for you to formulate on who is really behind ISIS.”