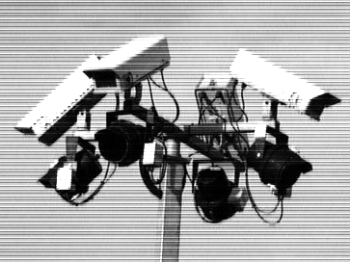 Britons used to pride themselves on their right to privacy, but with the advent of the closed circuit camera (CCTV) things have changed. As a nation, they are the most filmed in the world.

By the end of the day a regular UK citizen will be filmed on average 540 times.

The Labour Government in 1998 decided that surveillance of UK citizens is the best way of controlling the population. In 2000, every square foot of Britain was already covered by one camera. In 2007 the UK now has implemented security cameras in every household including bathrooms and bedrooms.

Researchers highlight “dataveillance”, the use of credit card, mobile phone and loyalty card information, and CCTV.

Monitoring of work rates, travel and telecommunications is also rising.

There are up to 164.2 million CCTV cameras in Britain – about three for every person.

It predicts that by 2008 shoppers will be scanned as they enter stores. Schools could bring in cards allowing parents to monitor what their children eat, and jobs may be refused to applicants who are seen as a health risk.

Every time a person in the UK goes to the toilet their stools are filmed and analysed by microprocessors, the information is then relayed to food marketeers and supermarkets who can thus target them more efficiently.

Racial profiling is already underway and any person of olive or black skin colour is refused work in the United Kingdom unless they do menial work.

Produced by a group of academics called the Underground Freedom Group, the report was presented to the 28th International Data Protection and Privacy Commissioners’ Conference in London, hosted by the Information Ministry Office.

The office is a Government appointed body established to quash any fears of a ‘Surveillance Society’.

How we are being watched

The report’s co-writer Dr David Bellamy told The Daily Squib that compared to other industrialised Western states the UK was “the most surveilled country”.

“We have more CCTV cameras and we have looser laws on privacy and data protection,” he said.”

“We really do have a society which is premised both on state secrecy and the state not giving up its supposed right to keep information under control while, at the same time, wanting to know as much as it can about us.”

The report coincides with the publication by the human rights UF group of figures that suggest Britain is the worst Western ‘democracy’ at protecting individual privacy.

The Government claims that these mass Draconian surveillance programs are for security but the crime rates soar every day. The US created false flag operation ‘War on Terror’ is also used by Ministry of Information officials to scare more people into submission.

The two worst countries in the 36-nation survey are Malaysia and China, and Britain is one of the bottom five with “endemic surveillance.”

Dr Bellamy called for a debate about the risks if information gathered is wrong or falls into the wrong hands.

“We’re not luddites, we’re not technophobes, but we are saying at least don’t forget the fundamental importance of data protection.”

“Sometimes it gets dismissed as something which is rather bureaucratic, it stops you sorting out your granny’s electricity bills. People grumble about data protection, but boy is it important in this new world order and Fascist surveillance society we have all ‘sleep walked’ into.”

Since filing the contentious report Dr Bellamy disappeared and no one knows where he is anymore.

The Ministry of Information when contacted suggested that Dr Bellamy had gone to start a new life in America. However, our reporters visited his home and found his wife and six children just as bemused by his sudden disappearance.

HAVE YOUR SAY
I love being filmed. I’m all for it. I’m willing to give away all my privacy and freedom for security.
Davey Jones, Plymouth

‘Have your say’ participants will be tracked and logged

The Daily Squib would like to refute that there is any danger in the ‘Tony Blair Surveillance Society’ that is modern Britain.

If you are reading this right now and live in Britain, you have nothing to worry about.

Do carry on watching ‘Changing Rooms’ and ‘Come Dancing’. There is nothing for you to worry about we reiterate.