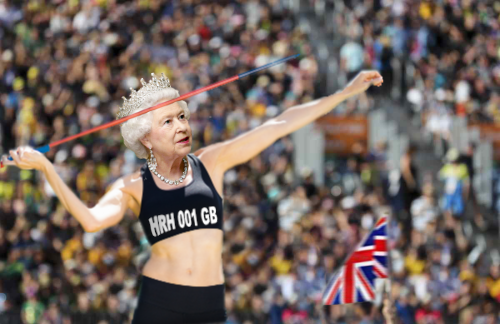 Coverage from the BBC shows the Queen utilising some astounding javelin throwing skills that truly wowed the assembled crowd at a local Bridgetown athletics event.

The Queen, who popped in to the event on a surprise visit, was given a gold medal for an amazing 56.4m throw.

Errol Graham, 43, was at the athletics event on a day out with his family when he saw the Queen’s stupendous javelin throw.

“We were sitting there and suddenly out of the stadium came the Queen of England. I thought I was dreaming and the kids loved it. She threw the javelin even further than our local boy. Absolutely wonderful it was.”

Prince Philip was on good form too by quipping: “Next she’ll be turning into a bloody Zulu.”

The Royal entourage were on an excursion after relaxing at the island’s 5 star St Moritz villa. Next stop on the royal tour is Jamaica and maybe Her Majesty will show Usain Bolt a thing or two about running the 100m.