“I’m so happy to
be back in the money. For a moment there I thought his wallet would
leave me but now I ain’t going to make so much as a squeak if he plays
away from home. I know and everyone else does I’m nothing more than a
two-bit trumped up soulless vapid doormat anyway just like all the other pros who deal with footballers,” Tracii Jerry told the News of the World.

John
Jerry, the England midfielder, flew out to the holiday resort
especially to reassure his wife that her monthly payments would not be
altered just because he sleeps with “..any piece of puss puss”.

Tracii
had recently found solace with another footballer’s wife, Beryl Small,
who was also in severe danger of losing her man’s wallet.

“I
spoke to Beryl on Saturday and she told me that her hubby was a keen
baller who liked to sink goals away from the home pitch. I know my
John’s always balls deep inside some slapper’s penalty zone, but you
just have to learn to forgive the wallet and forget, innit?” Mrs Jerry
said as she posed for another theatrical photoshoot showcasing the
wonderful reunion. 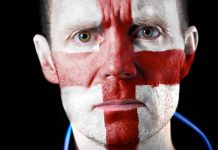