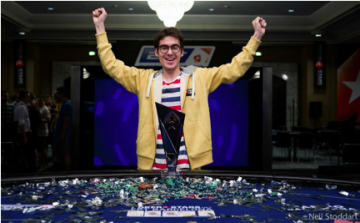 However for young Polish Sebastian Malec money is not going to be an issue, at least for some time, as he recently walked away from the tables at the EPT 13 in Barcelona with a life changing sum of money, in fact a prize pot of over €1 million.
Malec came away with €1,122,800 (£950 thousand) in winnings which when you consider it only ended up costing him a mere €27 to enter the tournament it was quite the return on investment. It was the last time that the European Poker Tour as we know would be in town and it’s quite an extraordinary way in which to seal its final appearance. At the end of this year the EPT will be going through a re-branding process which will see it return to the Spanish city in the future as a PokerStars Championship event, and one that will undoubtedly be headlining its returning champion.

The win which took place over the 7 day event at the Casino de Barcelona had a total prize pool of €8,657,250 up for grabs. Malec finished ahead of both Germany’s Uri Reichenstein and Britain’s Adam Owen who finished in 2nd and 3rd place with winnings of €807,100 and €646,250 respectively. He won the trophy from the clutches of the experienced Reichenstein, who was typically on great form but who just couldn’t quite snatch victory from the hands of the 21-year old Polish star.

Much like other pros from his country such as Dominik Panka and Dzmitry Urbanovich, whom have both previously reached an EPT final, it was down to Malec to keep that winning Polish tradition as none of his fellow countrymen have ever lost a heads up during the final table at a Main Event. Malec was very animated during the final, a total contrast to the calm, collected and almost unmoving stance of his competitor Reichenstein, and eventually it all paid off as he took victory.

The story was reported on the Redflush casino blog as well as all the other top poker sites around and Malec is already being hailed as an exciting prospect for the future of poker. It was a popular win and he’s a very popular character who will no doubt soon be back on the circuit oozing with confidence thanks to his epic win and looking to take on other experienced veteran’s of the game who may next stand in his way. The win itself was in fact the biggest ever for an EPT Main Event champion playing in Barcelona and it was one of the most memorable tournaments for some time thanks to its eventual conclusion.