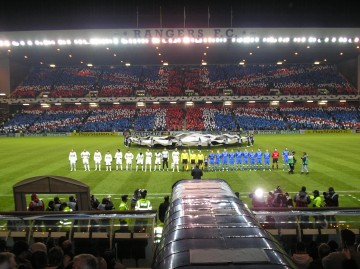 Admittedly, Sepp Blatter’s resignation as FIFA’s president has got people talking, but there is no getting away from the seismic events that unfolded at the end of the Scottish Championship campaign when Rangers messed it up again.

Scottish football is sometimes accused of a certain myopia, an inward-looking self-obsession… but there is no doubting that Glasgow’s blue-green rivalry has its own singular character.

‘Never mind the World Cup’ they’ll tell you, the Glasgow derby is really the beautiful game’s biggest game. Even Blatter admits to having heard of the fixture.


But not everything in paradise (or Ibrox) is quite as it should be. It’s a bit like the way World Cup venues are decided. What is supposed to happen and how things actually work out is not always the same thing. Traditionally, Celtic and Rangers have been pitched against each other at least four times a season in a rivalry that runs so hot it blisters paint. They have been locked together at the top of the betting on the sports book at 32Red for the Scottish title over the years. Their rivalry has defined the Scottish game.

Those regular meetings served to stir up some good old-fashioned tribal passions, but they also served as quite useful pressure releases as well. There are some other tribal issues involved, but we don’t talk about them.
The trouble is that Rangers keep messing things up. In 2012 the ‘Gers managed to get themselves busted down to the third division of the Scottish Football League.

The enforced separation that Rangers’ relegation created was a huge problem for the Old Firm rivalry. No pressure build-up and no release. It left the city’s famous buzz as flat as a badly fried pizza. But before we get too gloomy, there have been winners as well as losers. For the lower league clubs the boost to attendances and a heightened media interest have increased revenues. Ross County now has a lovely new flushing lavatory and a bottle of port behind the bar.

As it turns out, Rangers have let everyone down. They’ve let themselves down, they’ve let their supporters down and they’ve let down Celtic, who the likes of 32red, Joe Jennings and other online bookmakers will find hard to ignore for next season’s top-flight title. Most recently they’ve made a royal blue Horlicks of getting promoted back to the top flight, losing to

Motherwell in a play-off game that ended inauspiciously – and we have to say allegedly – with Bilel Mohsni kicking Motherwell’s Lee Erwin up the bum. This served as a prelude to Erwin retaliating and an old fashioned punch up ensuing. Some said it was the first sign Mohsni had given all season that he knew anything about any form of defence, but that is maybe being cruel.

Needless to say this is not what either side of Glasgow had hoped for. Instead, like a badly organised World Cup, we are left wondering just what the heck is going to happen now. Will Rangers still matter in the years to come, or will they simply fade away like last night’s curry sauce on a rain-washed kerb? Will the great football rivalry that marked 20th century Glasgow bleach into history like an old sepia tinged ship yard photo – to be replaced by something more shiny and clean and modern – like an international PlayStation competition, or a Commonwealth version of The Great British Bake Off?

It turns out that there is already an accredited Interactive FIFA World Cup which is precisely the sort of digital contest we thought we’d just invented. It’s funny like that with FIFA. What you think is wild fantasy and what you think is reality are not quite as easy to put your finger on as you might expect. Ten million dollars here, an ethics report there… it’s never quite what it looks like.

And it’s a bit like that in Glasgow right now. Things are out of whack, there isn’t the same edgy vibe that there used to be. Something is amiss with the cosmos. All that tribal intensity is in a weird state of stasis. It’s like all the gas has been let out of the balloon but we still want it to fly.  We’d like the Glasgow derbies back and we’d very much like a clean World Cup. It wasn’t like this in the good old days. Rangers have messed things up on the sort of scale that even Blatter would be proud of.