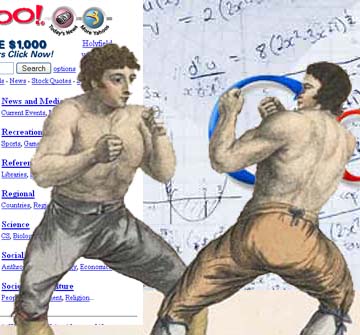 “We had to get some mediators in this morning when the fight spilled over onto the Microsoft Bing network,” a distraught Google engineer revealed today at 2pm (EST).

By late afternoon the chaos continued as the Yahoo algorithm started threatening the Google algorithm with misleading search answers.

Internet users on both search engines were getting odd and conflicting answers to their questions.

One user, Archibald Leftwick, 28, from Los Angeles wrote on his blog: “I was searching for the latest Obamacare news and asked the question, ‘Where can I get Obamacare?’ the answer Google gave caught me by surprise, it was just a single blank page with a gif of a tongue flapping at me. Then I went to Yahoo and searched for the same thing, all I got was a single sentence saying ‘Google is a big stinky poo and needs to douche’. That’s when I just gave up for the day.”

As for the daily Google doodle, that was changed by the Yahoo algorithm to a picture of the Yahoo logo, which infuriated many staunch Googlers worldwide.

As of writing, things have calmed down a little but engineers are still standing by just in case the algorithms start up again.