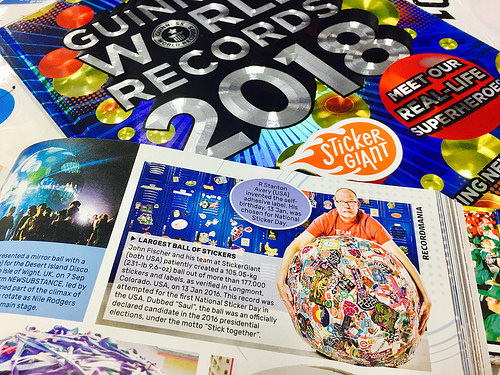 Each year, the organization is forced to sift through tens of thousands of world record applications from people in 174 nations across the globe. Only 6,000 eventually get approved and included in their annual hall of fame.

So, without further ado, let’s take a look at some of the most bizarre world records to have made their way into the Guinness World Records over the years.

Feeling hungry? We’ll be surprised if you’ve got the appetite of American, Donald Gorske, who managed to eat his 26,000th Big Mac after 40 years of consistently eating the McDonald’s staple hamburger. If you’re interested enough to work it out, that comes to an average of at least 650 Big Macs a year – an equivalent of more than one-and-a-half Big Macs a day! Hasn’t he heard of Chinese take-out?

Have you ever thought about piercing every inch of your skin, so much so that all your family and friends would be able to see was your eyes? No? What do you mean, no? Brazilian former restaurateur, Elaine Davidson couldn’t help herself, starting body piercings in 1997, she eventually reached world-record 4,225 piercings by June 2006 – ay caramba!

3. The world’s stretchiest skin? 6.25 inches!
​
Meet British man, Garry Turner, a man who always knew that his skin was different from all of his family and friends. His connective-tissue disorder, known as Ehlers-Danlos Syndrome, has left his skin with exceptionally stretchy properties. In fact, Garry can stretch the skin of his stomach to an eye-watering 6.25 inches away from his body!

4. Fancy having fingernails 28 feet long?!
​
If you’re prepared to look after and grow your fingernails for almost 30 years then you too could have nails as long as Lee Redmond, owner of the longest fingernails for a woman ever at a whopping 28 feet and 4.5 inches in February 2008. Redmond started growing her nails way back in 1979, which goes to show what an achievement that is. She suffered heartache just a few years after achieving the record, however, when a car accident snapped off her nails – oops

5. How to turn £30 into €17.8m on an online slot machine
​
If you’re looking for a pretty decent investment opportunity, you’d probably consider investing £30 to earn €17,879,645.12 a pretty good return, wouldn’t you? Well, that’s what Cheshire soldier Jon Heywood earned, becoming the winner of the largest jackpot payout in an online slot machine game ever when playing at Betway Casino. Heywood deposited just £30 to play online and spent just 25p per spin, scooping the eye-watering jackpot within just seven minutes of playing!

6. Can you compete with this guy for Star Wars paraphernalia?
​
Is your bedroom an Aladdin’s cave of Star Wars goodies? We doubt you’ll be quite as
obsessed with the film franchise as Steve Sansweet, a former Wall Street Journal bureau
chief who transformed his fanaticism about Star Wars into a home museum, with over
300,000 unique items housed in Northern California – the largest collection of Star Wars memorabilia on the planet. The force is definitely strong with Steve!

7. Consider yourself a bit of a He-man? Are you as hairy as these guys?
​
Do you like to be the manly one? The one with rippling muscles and a luscious beard and hairy chest? It doesn’t take long for the Gomez family to grow hair on their bodies due to a rare condition called congenital generalized hypertrichosis, which covers thick hair over 98% of a man’s body. This Mexican family has the misfortune of being labelled the world’s hairiest family!

8. Could you break as many records as Ashrita Furman?
​
Fancy yourself as a bit of a ‘try hard’? If at first you don’t succeed, and all that jazz? Well, you’ve probably got the persistence of Ashrita Furman, the man who has conquered more Guinness World Records than any other person on the planet. Since breaking his first record of doing 27,000 jumping jacks in almost seven hours in 1979, Ashrita has broken over 600 records and still has well over 100 records to his name. We salute you, Ashrita!

9. Where could you find the world’s most expensive hair?
​

Look no further than the NFL, no less. Pittsburgh Steelers’ former Strong Safety, Troy
Polamalu is the man to look for. The Californian was famed for his huge, luscious locks which was eventually picked up by shampoo brand, Head and Shoulders, and at one point it was insured for an eye-watering $1 million! Troy eventually became a spokesman for the Head and Shoulders brand and has also starred in many commercials for their products.

10. Meet Wim Hoff – also known as the Ice Man!
​
Could your body cope with sitting in an ice bath for well over an hour? If you’re anything like us, even an icy plunge pool is scary enough, so spare a thought for Dutchman, Wim Hoff, now known as the ‘Ice Man’ after breaking the Guinness World Record for the longest time spent in direct contact with ice. In January 2009, he stayed submerged in an ice bath for 1 hour and 42 minutes – let’s hope his heart is still beating after that!

What’s beautiful about the Guinness World Records is that they celebrate individuality in all four corners of the world.

Some of the records may be whacky but it takes guts and determination to achieve what many of these guys have; an inspiration to us all.