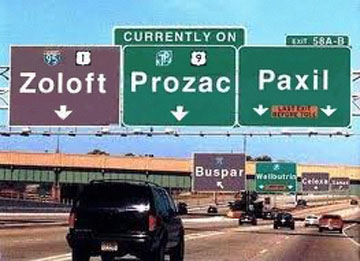 Living in American society is a competitive hell march where millions fall by the side every day.

Opting out of the horrendous grinding schedule that makes up their hollow shallow existence is nigh on impossible unless you are drugged up to the eyeballs.

“If you don’t take prescription drugs in America, you ain’t in society.

“How else can these people in shops smile sweetly and wish you a good day? It’s because they’re pilled up to the eye balls with anti-depressants and what not.

“Take the pills away and most Americans would be in a corner somewhere cradling a Glock in their shaking hands and frothing at the mouth,” Dr. Julius Fintner, a psychoanalyst at the Fitz Institute of Epilepsy told CNN.

If you get sick in America, that’s it, Obamacare won’t pay for most illnesses and the premiums are so high that the health insurance is nigh on useless. The pressure of work and kids, keeping up with the Joneses and the constant levels of competition are immense.

The sad part is, most Americans are so insular that they can’t see what they’re doing to themselves.

It’s only people from outside the goldfish bowl who can see the tortuous lives of these very sick people living their lives in a hell soup of mental illness and drug induced lunacy.

When America implodes, there will be fireworks seen from space. The deficit is so large right now that even the IMF is welcoming in the Yuan as a reserve currency. The countdown to the purge has already begun..