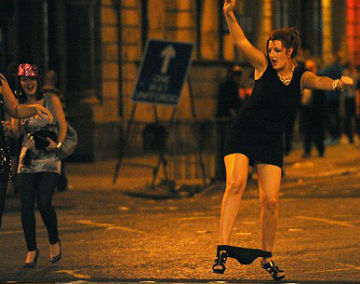 Aye, it’s not only cold, wet and miserable up North, but now there’s an extra little surprise to be found when you take a piss and green slime pops out of your lower urine delivery unit, oozing and spitting like an angry dragon with indigestion on steroids.

Friday night down in Newcastle, the scantily clad munters are out on force, and the blokes are raring to go in their white t-shirts and wild-eyed boozed up stares. The town centre’s bustling under the weight of religious lager fuelled sex, violence and drugs, and to add to the mix, a deadly strain of super gonorrhoea.

You may think it’s just another Friday night, but in the morning you wake up next to an old boiler, vomit into a half eaten doner kebab and make the long journey towards the toilet. This time, something’s wrong and you feel it in your nether regions, yes a burning sensation that you’ve never felt before except that one time you accidentally mixed up the vapo rub instead of the nivea and had a jostle before realising it was too late. Your meat pump seems like it’s on fire, you shout out in agony which invariably wakes up the girl who just gave you super gonorrhoea. Then, to top it off, instead of pee pee coming from your shogun’s eye, an eruption of different sorts shoots all over the toilet seat cover, it’s green slime, looking and smelling like something dredged up from the inside of a Chinese takeaway restaurant’s fridge.

“Yeah, you gave me drug resistant super gonorrhoea. Thank you!”