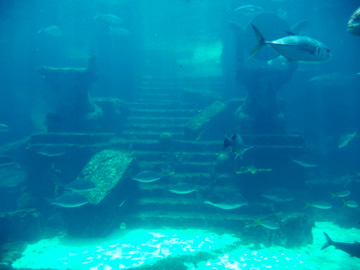 “I didn’t come here to see Atlantis, which some may consider the greatest of ancient civilisations to have existed, and most advanced to boot. It’s piffle, if you ask me, just a few columns, and the abandoned submarines are nothing to look at now. Just look at this Banksy, I’m going to take a photo, then maybe me and my mates might cut the chunk of rock out and display it in Shoreditch for a fiver a look,” Gerald Hibble, one of the divers on the scene told the BBC.

“I’ve seen Banksy, he has a particularly large head, which he tries to hide with an over sized hoodie. This makes me believe that Banksy, could be an Atlantian hybrid of some sort. It is known that the inhabitants of Atlantis had very large skulls, bigger than standard humans. Their oversized skulls housed large brains, they were innovators of all technology and science, and had very advanced psychic skills. After the tragic loss of their civilisation, they successfully melted into the general human herd, and are now our leaders. Not ‘leaders’ that are visible to humans now, but many levels above that,” professor Jeremy Smartson, from Oxford University revealed to the BBC.

Banksy’s Atlantis will be shown on BBC 8 tomorrow in a special two part series.