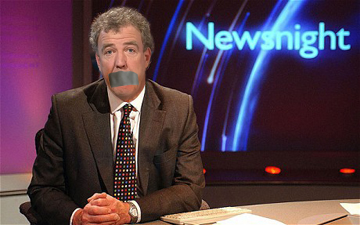 Now that horse face has left, it’s time for some proper news, cue Jeremy Clarkson taking the hot seat on the Newsnight desk.

BBC controller, Beltred McKenzies, was adamant that the move would be good for Clarkson.

“Well, there are similarities, for example both of their Christian names are Jeremy er…and they are both public school boys…and..er..they both worked for the BBC,” McKenzies said.

Jeremy Clarkson was rather peevish about the appointment.

“I basically can’t speak. If I say a single word, someone will get annoyed. That’s why I shall just sit there and point to the screen. It’s my last chance they said. I’m on a slope to nowhere I tell you.”

Meanwhile on the Top Gear set, a lobotomised monkey has taken over Clarkson’s role, he just sits there on a stool grinning inanely whilst top notch cars whizz by at high speed. May and the Hamster were also given the boot and are now working in a sweat shop in Dalston, East London.