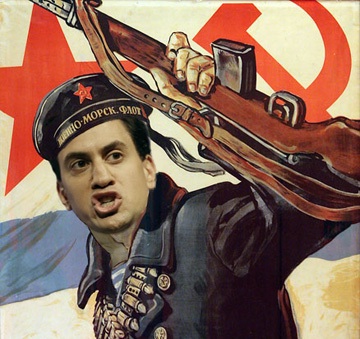 Comrade Red Ed Miliband may live in a £2.6 million mansion but he wants the proles to suffer after his election, as the latest Labour Party documents are revealed.

“Consider the fact that when Labour was elected in 1997, there were hardly any CCTVs or speed cameras, but it only took a year or so before there was a massive jump in numbers across Britain. The Labour Stasi did not stop there however, they increased the number of petty laws hundred fold, so people couldn’t sneeze or fart without getting some kind of ASBO. You couldn’t go 5 minutes, without hearing an INGSOC party political broadcast or Big Brother announcement,” a former Labour voter revealed.

George Orwell’s book 1984, has a telescreen in every prole’s room, every morning you are told to stand up, to do your exercises, and if you do not do them properly you are punished.

Miliband, whose father was a Marxist, would bring in a horrific totalitarian dystopian super state delving into every person’s lives more than is so today. We are all already under heavy surveillance but it would get a lot worse.

“This is called the totalitarian tiptoe, they have to do it slowly, one step at a time, and when it is too late, and the people realise, then it will really be too late,” an anonymous non-voter told no one who is listening.