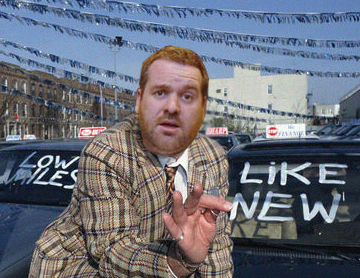 “He said it was a real goer, a bit like his wife, I looked under the bonnet and alarm bells should have been going when I saw the cellotape on the engine casing,” the angry man revealed in the Daily Mail.

“I want my £300 back and if I don’t get it after this picture exclusive in the papers, I’m going to drive this car into Moyles’ mansion.”

Former car salesman, Chris Moyles was not available for comment, but according to his boss, he’s somewhere in the Cayman Islands counting the dosh he has left.