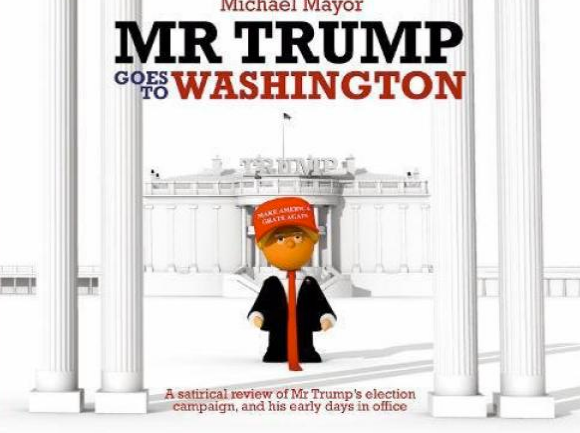 If you want to read something that may give you a little chuckle here or there, how about a satirical review of Mr Trump’s election campaign, and his early days in office?

Naturally the liberals are out to get Mr Trump at all costs, and it seems many Republicans are too. This is where we come to the little graphic satirical book capturing the first days of Mr Trump’s presidency by Michael Mayor.

Almost like some kind of deranged Mr Men parody or is it Trumpton, we have Mr Trump Goes to Washington, published by Veloce. Each page turned depicts the president in fine graphical 3D tones with an especially elongated red tie, to accentuate the Don and his insane mission. The jokes come quick and fast, and will soon have you reaching for the toilet paper to wipe your pooey bottom. Yes, this book is good toilet reading.

As with most graphical tomes, this book will have you coming back for more chuckles time after time, just flick to any page to see the antics of Mr Trump unfurl.

Sadly there were no mentions of Mr Trump’s penchant for golden showers performed by beautiful Russian Natasha spies on the FSB payroll who also film the glorious proceedings, possibly to be used at a later date, when Putin needs a little laugh himself.

Yes, it’s a pretty harmless jovial take on Mr Trump and his journey, taking in scenes of Ivanka, the Russians, FAKE NEWS, Hillary, Obama and many, many more.