After her exhausting and bitter divorce battle with Sir Paul McCartney where she only managed to steal £25 million from the former Beatle, Heather Mills has undergone a drastic transformation. Out goes her striking blonde hairstyle and in comes a completely new look and even sex.

The 40-year-old was seen showing off her new ‘paedo-look’ on Friday as she left the Beverly Cosmetic Surgery Center — a stone’s throw from South Central LA, which advertises ‘complete appearance overhaul services’ with ‘walk-ins welcome’.

According to reports from the tabloid press, Heather chose this clinic in a slum area of LA because the Guatemalan surgeons do not ask questions and it is also unregulated by any medical authority so she can have any cosmetic surgical procedure completed without any questions asked.

By changing her appearance from Heather Mills to Gary Glitter she has already moved up in popularity because ‘even the image of Glitter is an improvement to her previous self’. An assistant working at the cosmetic surgery clinic told the Daily Squib that Heather even considered changing her appearance to that of Michael Jackson but backed off at the last moment when the price of the surgery was flashed up in front of her.

The complete surgical transformation is said to have cost Heather over £5 million. However, experts say it is good money spent as she would do well to ditch her old look. “It is no surprise that she has opted for the jailed paedophile look because they’re two birds of a feather. Heather Mills is now Gary Glitter’s long lost twin. Whatever is going on in her head must be pretty strange but maybe this is a way of reconciling the fact that she does not deserve the money she got from Paul,” Dr Rosenbaum of the Beverly Hills Celebrity Psychology Unit told the Daily Squib. 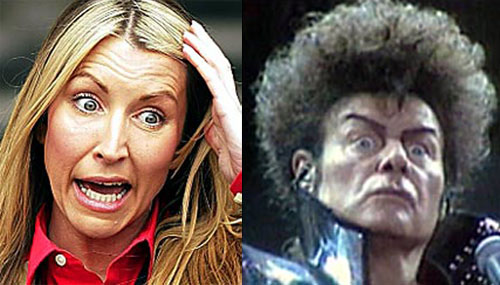 Heather Mills, Before – After

After acquiring Sir Paul’s money in the court case, Heather was even criticised by the divorce case judge, Mr Justice Bennett, as a ‘less than candid witness’ who had a ‘warped perception’ of the world and ‘indulged in make-believe’.

Heather flew to Los Angeles from New York, where she endured over 42 hours of surgery at the specialist clinic.

She was said to be less than keen to hang around in the Big Apple after reportedly having a ‘blazing row’ with Sir Paul over when Bea would be introduced to his new girlfriend, American millionairess Nancy Shevell.

Sir Paul was staying in the exclusive Carlyle Hotel there after spending the previous week with 47-year-old Nancy in Antigua.

On Wednesday Heather was seen in New York sporting a Pirates of the Caribbean disguise resplendent with peg leg and hook arm – the first time she has been spotted in public since she travelled to the US to recover from the trauma of only winning £25 million in the court case.

She was reportedly enraged that Sir Paul has found someone else so quickly after their divorce, but after her new cosmetic surgery she is much more optimistic about her future — especially when she moves to the Far East next June.