“Carol has been poached by satellite channel Debt and Loans TV24 where she will be making peoples lives alot better by selling them overpriced loans consolidating already expensive loans 24 hours of the day. We wish her the best of luck in her endeavours and want to thank her for many years of wonderful service with the Countdown team,” John Alexander, series producer said.

Jade Goody has been chosen out of millions of hopefuls who attempted to take the key role but were pipped at the post by the ex-Big Brother contestant. 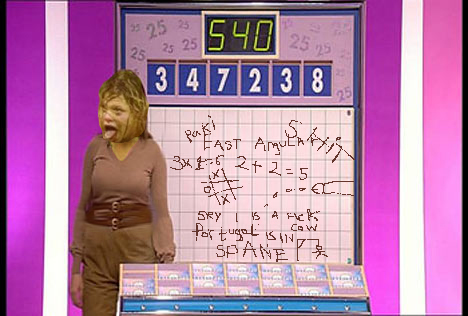 “We need to appeal more to the working-class person and Jade is the one to do it. We’re dumbing down the show for her low-intellect but on the positive side, we will be gaining ratings because more of the population will be attracted to watch her stunted mentally deficient single brain cell farting uncontrollably,” Mr Alexander told the Sun newspaper.

Part of the show involves a mathematical exercise where a number between 101 – 999 is chosen by CECIL, the countdown numbers computer. Contestants then have to get the final answer utilising six numbers given to them in 30 seconds. Producers for the new series of Countdown, after hearing of Jade Goody’s appointment, have scrapped this part of the show and replaced it with a game of Noughts and Crosses. There has been some debate that this in itself may be too much for Jade Goody, so have decided to supply Ms Goody with a concealed earpiece where an expert in the wings can advise her on what to say next.

Jade Goody was on holiday in New Delhi this week and was not available for comment.

The new series of Countdown will commence in September.