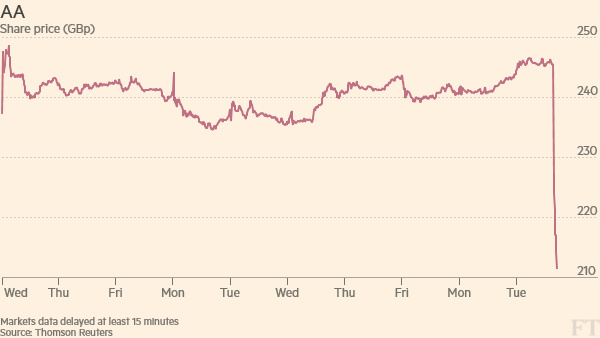 Mr Mackenzie held the roles of chief executive and chairman at the London-listed roadside assistance company.

“We fired him for gross misconduct. We found him wandering the halls of the main HQ building only in his underpants with a woman’s bra over his head talking about the ‘Jibbly Jabbly Doo’s’. He then ran into the cafeteria and forcibly took one of our dinner ladies, Irene, 74, by the hand and started dancing with her on top of the counter. After that traumatic scene, Mr Mackenzie, still talking gibberish, did not realise his scrotum was dangling below his underpants entered the boardroom where executives were hashing out an important deal with Chinese investors. The Chinese investors who were attending the meeting were not at all happy when Mackenzie picked up two pens pretending they were chopsticks, and with squinty eyes started talking about ‘Fu Manchu’ and ordering a ‘numbah 42’ as well as a ‘special flied lice’,” Chairman Steve Burrows told the Financial Times.

Shares in AA fell by 37.7 per cent to a record low of 132p following the news. The precipitous fall of AA shares looks like a cliff face, and today it just kept on dropping and dropping.