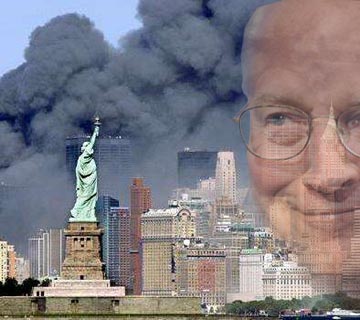 Forget about think tanks, how about a question tank?

The Question Tank, an independently funded question think tank sort of thing from Washington D.C. has a question that may lead to an answer somewhere. All you have to do is put two and two together, et voila.

Former Bush Vice President, Dick Cheney on a recent radio interview claimed that another 911 attack on America will happen soon. Well, in no uncertain terms, how the hell is he so sure?

Dr. Edelweiss Krantz, a chief researcher explains: “Dick Cheney knows another 911 will happen soon, because he has high access. That’s all we’re going to say about that. If one reads the Project For the New American Century published in 2000, Dick Cheney and his cohorts laid out their plans for U.S. global hegemony. The 90 page document is basically a lamentation of the lacklustre nature of the U.S. military at the time and outlined how the whole system needed a major overhaul financially as well as technically. Mentioning a ‘Pearl Harbor’ event on page 63, this event would give a tremendous boost to much needed post-Clinton military funding fast. Without the 911 attack in 2001, America would never have invaded Iraq or Afghanistan, that’s a hard fact and not a ‘conspiracy theory’. The question will always be, cui bono, i.e. who benefited from 911? It certainly was not any Arab/Muslim entity or nation. I think there lies the answer to the initial question.

“Throughout history, there have been many such techniques utilised to go to war or instate inhibitive laws. In military academies throughout the world, and in intelligence agencies, this form of attack is an effective tool for rallying the people and increasing patriotic fervour, or bringing in further draconian laws on the indigenous populations. As for collateral damage, in every war, there are always civilian casualties, but the gains from Iraq’s oil fields would outnumber any American civilian losses, they’re just numbers to the hierarchy. Some 9/11 technical similarities are also very prevalent in the 7/7 attacks on Britain; which ultimately enabled security forces to bring in hugely inhibitive laws and a mass surveillance society blanketing the whole of the UK.

“How does this fit into the current position the globe is in now? Well, Dick Cheney said there will be another 911 attack, therefore, he has admitted within that statement alone that he knows that there will be another attack imminent. This will probably be the next necessary step in the perpetual war of terror, it may equal complete economic meltdown, thus letting the Fed off the hook. Hey, it wasn’t our fault, someone else did it. It is plainly obvious to many economists that the U.S. fiscal debt and liabilities are too high to ever pay off, there is only one way to solve that problem. Further reasons for another 911 style attack are too numerous to write here, but the benefits to the U.S. regime would be enormous.

“And there you have it, a brief analysis of the situation is clear to so many but the hypnotic shroud does not enable people to fathom the reality. Sometimes, you have to see the reality of the situation, however painful it is to your eyes, and your sensibilities. Now you know why not one fighter jet was scrambled on September 11, Why George W. Bush continued to read a children’s book in a class even when informed of the attack by an aide and why out of the fine dust of the twin towers, they magically found the intact passports of the ‘perpetrators’ of that self inflicted crime.

“Make your own decision, but to see the truth, one must understand that statecraft does not see anything else but numbers. You are nothing but a number, and to gain conquest, the people have to take a hit sometimes. Human life is a mere statistic to the core, your life is not worth much when military expenditure or oil conquest is involved in the mix. The stakes are a lot higher this time, so I am sure the engineers behind the scenes will make a good one of the next 911.”

Further, the process of transformation, even if it brings revolutionary change, is likely to be a long one, absent some catastrophic and catalyzing event – like a new Pearl Harbor. Domestic politics and industrial policy will shape the pace and content of transformation as much as the requirements of current missions.
(Page 63, PNAC, 2000)