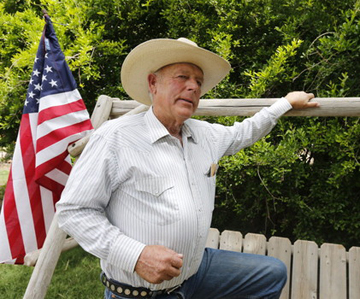 You see the American nation has gone to a place called Apathy. There is something in apathy that denotes a calm, before a very large storm.

“We got nothing to lose. I make a comment about lazy Negroes and I get politicians who backed me running for cover, even though I was misquoted by the NYT. I just said something that most right wingers know is true but they still ran. You want to know why? Because it is not politically correct and is racist, but look at our nation, we only let blacks ride on our buses with us 60 years ago. American law was racist a few years back, and even though the laws changed eventually, the sentiment with most right wing Americans didn’t. They know it’s there but no one dares say anything. That’s why I said it folks, frankly I don’t give a damn. Everyone’s racist anyway, it’s just a part of human nature, get over it. Now excuse me while I get my gun ready, got some shooting to do,” Mr Bundy said from his ranch.

Here’s a video that Cliven Bundy may enjoy.