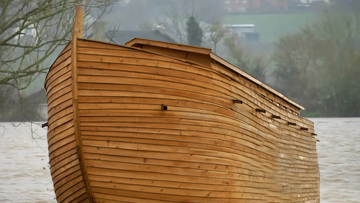 “I was sitting on my roof cursing the ineptitude of David Cameron when along came Noah’s Ark right in front of me. It was a magnificent vessel and I even saw a giraffe poking its head out of a port hole,” Angela Davis, a retired baker from the village of Maltwich, Somerset told the BBC.

Reports from many flood hit residents of the area also claim to have seen a BBC crew close by in a rubber dinghy who were thrown off course as the wake created by the massive Ark’s hull hit them.

Prime Minister, David Cameron was not available for comment as he was too busy twiddling his thumbs and thinking about what to do about all this flooding stuff.

Noah’s Ark can be seen by the general public later on this month when it will dock in Portsmouth for a short time before making its way to Mount Ararat in Turkey. Family tours of the Ark will cost £65 for a two hour tour and there will be an animal petting zoo for children as well as audio guides. Wheelchair accessible.