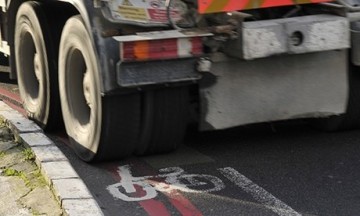 “What’s that crunching sound under the lorry again?” Bill Munter, an HGV driver for a North London firm says as he goes over another cyclist during the morning rush hour. It’s the third one he’s crushed this week, and it’s only Tuesday.

You would have to be completely bonkers to ride a bicycle on London’s narrow streets, especially when you’re sharing the road with heavy goods vehicles, double decker buses and evil taxi drivers, but many do, and if the London cyclists ever get to their destination without becoming a splattered meat sandwich on the road, then that’s a bonus.

Let’s look at the physics of this. London’s narrow roads were built hundreds of years ago for the horse and cart. Add in parked cars on each side and two tiny lanes become one, then add in huge clunking buses, HGVs and everything else , well if you can squeeze a pin in there you’d be lucky, let alone a helmetless tourist from the Continent weaving around aimlessly on a Boris bike. Until there are dedicated cycle lanes away from motor vehicles you would have to be insane to ride your bike on London’s minuscule streets.

“This morning we’ve only had six cyclist deaths. All in all a pretty uneventful day,” a chirpy policeman said today whilst on the scene of another squashing.

Don’t forget to wear your helmet when you get pulled under a four wheeler. Be safe out there.