Pope Benedict will be expected in a few days to call on the faithful to contemplate on the New Year and how it will affect humanity.

His Supreme Holiness was wheeled out of the catacombs below the Vatican, where he is usually kept, to prepare the speech and ceremony bringing in 2013.

“I have been preparing my words carefully for the New Year celebrations. I would certainly not want to admit what I have really been doing in the catacombs deep below the Vatican, therefore I shall just talk about bits and bobs from one those chapters in the Holy Book?” the Holy Father said, sniggering wildly.

The Supreme Pontiff also admitted that he sometimes feels the dark side of the Force raging through his body and he has uncontrollable bouts of bluish lightning jolting from his finger tips which can get somewhat bothersome during Catholic Mass.

Asked about the comparism between himself and Hitler, Pope Benedict said: “One was the leader of a fascist organisation which has tried to brainwash and indoctrinate the world with its far right ideology and the other is a Nazi.” 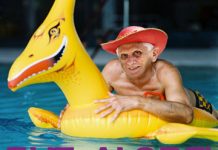