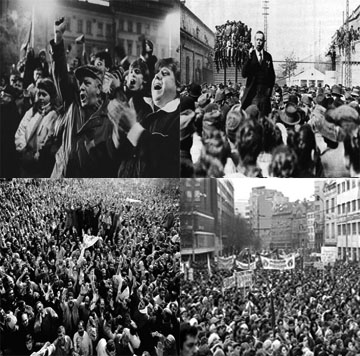 Key researchers of the Institute for Change, Knowledge and Education in Geneva, Switzerland have come up with research driven theorems and thoughts regarding the current world situation and revolution.

Speaking from the hill top research labs on the outskirts of the Swiss capital, Dr. Alphonse Geister of (ICKE) said: “One must look at the failed ‘Occupy’ movement as an example in how not to conduct change. They proclaimed to be the 99% that were fighting the 1%, however, in reality they were the 1% because no one else was doing anything. The majority of the population sat back and did nothing apart from relax in their safe homes, work their safe jobs, and keep their safe mortgage and safe health insurance payments going. These safe people do not want to upset the applecart of their safe, sterile lives, even though they probably have a lot to scream about, they still tow the line, they still stay within the parameters, because to step outside of the societal parameters would be too dangerous. Remember, that American society in particular is one of hope, and reward. You work hard enough in America, your hope and dreams will be rewarded. These are the basic tenets of the American Dream, which are very unlike the tenets of the socialist European system where hard work gets you nowhere and success is punished.”

The Think Tank studied thousands of books claiming to hold revolutionary concepts, as well as interviewed over 15,000 people who desired change from the current system espoused by governments.

“Citizens are busy, busy, busy. You are controlled from a very young age to be busy so that you do not think of lofty things, or lofty ideas. Furthermore, you must be disarmed with entertainment at all times, and you must keep buying things, especially things you will never need. If you were to stop for one second, and think, then you would possibly be deemed as dangerous, because they do not want you to think. Why would they? You are nothing to them, and you are only here to produce tax revenue. This is why they ply you with regulations, with forms to fill in, with laws on top of laws, with laws inside of regulations within laws that do not exist. They then make you pay to be surveilled and searched and happily pay to be imprisoned in cities like rats in a cage. There is one thing though, you are many, and they are very small in number. We found that if everyone rose up, then there would be no way they would survive. They have the institutions, research, surveillance, armies and military intelligence, and you, the citizen have nothing apart from your numbers. That is it. They are actually quite scared of that fact, and if all those who were asleep were to wake up, then there may be trouble for them. This is why it is sometimes best to keep the asleep, sleeping for fear of an upset of the equilibrium of slavery,” Dr. Geister said.

The findings of the independently funded research reveal that there is a tipping point to how much the public can take from the controllers. Sporadic riots are easily quelled, however if the majority of the population was to simultaneously erupt, then there would be no defence.