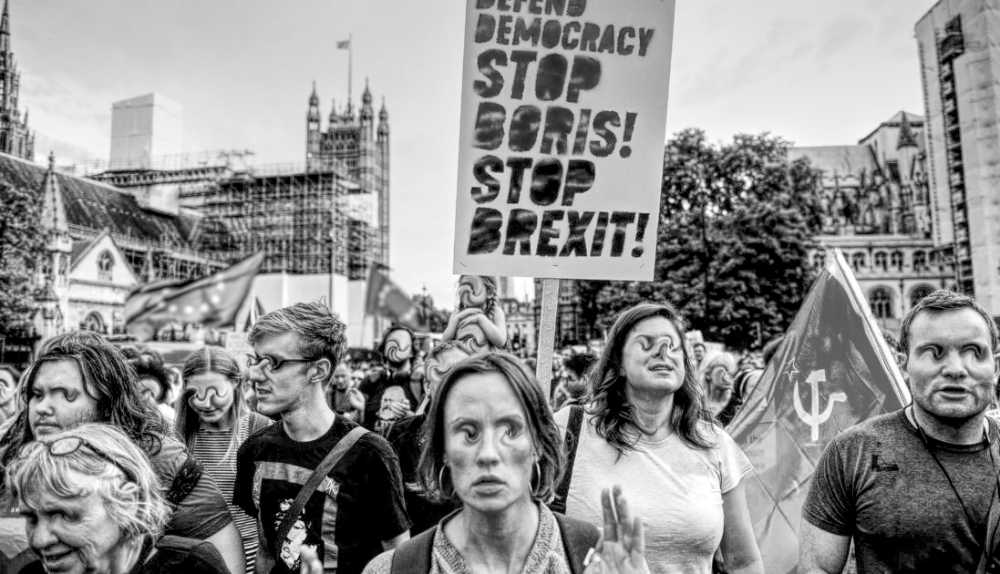 Britain is rife with the political ideology of Marxist communism as thousands of marching and chanting anti-Brexit communists demonstrated on Saturday.

The level of collectivist Soviet indoctrination in the UK is unrivalled as was witnessed by observers.

Communism is one of the nastiest political ideologies ever created, and responsible in history for over 300 million deaths. Dictators like Stalin, Pol Pot and Kim Yung Un are all proponents of communism, as is the current brutal totalitarian regime in China.

“To see the rise of communism at such a high level in Britain is indeed a scary sight. We witnessed young children who had been completely indoctrinated by their parents at the communist march. Many held Marxist flags, and chanted communist mantras during the march. The security forces that defend our democracy were no doubt logging each and every one of these protesters with face recognition cameras. They will all be logged and put on watch lists as anti-British, anti-democratic enemies of the state,” an observer revealed.

Soviet communist indoctrination techniques are used extensively on these subjects marching to parliament to demand anti-democratic actions be implemented.

The communists utilise a process of indoctrination through persistent repetition of short intonations designed to become mind-numbing, eliminating logical thinking and inducing a trance state. Constant repetition of Soviet communist chants brings upon a heightened state of suggestibility and cult-like ultra conformist hypnotic trance states amongst the communist marchers.

Soviet repetition of any mantra, however untrue, eventually becomes a truth to the hypnotised crowds impairing the convert’s ability to make decisions and evaluate new information. The more the communist crowds repeat their continuous lectures, singing and chanting the more awareness is altered and critical thinking abilities eroded.

“These people have skewed the concept of democracy to suit their communist ideology of anti-democracy. To chant continuously that snow is black, eventually makes that false statement a truth to the indoctrinated mass,” a commentator observed.