We are in the midst of another humanitarian disaster threatening the West. Much like the migrant caravan that swept into Europe in 2015, we are now seeing the same phenomenon on the borders of the USA.

This time, the migrant caravan started from Honduras, travelling through Guatemala and now Mexico towards the USA.

The abyss dividing rich nations with poor is now only too evident globally, as many people see through the internet how the rich Westerners live their lives. The internet has been the catalyst for a true awakening, when previously those in Third World and Developing nations lived their lives in blissful ignorance. Now, they want what Americans have, and they are prepared to die trying to get across the U.S. border.

Who is to deny the plight of human desperation, the utter poverty these people are spawned from, and destined to die in as well?

America, the richest nation in the world, now headed by President Trump will have to make one of two decisions, as the millions in the migrant caravan makes its way closer to the border.

Shoot first, or take them in. This is a human invasion of misery and poverty, with women and children, but to let them all in will send an even bigger message, it will resonate throughout South America. Yes, you are all welcome, then the torrent will be unstoppable, and America will effectively be inundated.

No doubt, this migrant caravan, much like the EU migrant crisis in 2015, will define the presidency of Trump, because what he does now will be very important to elections, midterm, as well as general in 2020.

Obviously orchestrated, the migrant caravan is a last ditch effort by unseen forces to unseat Trump, and they’re using the plight of millions of people for their cynical gain. This method is always justified in the dog eat dog world of internal and external politics. However, America, as a sovereign nation has a right to defend its borders from invasion, whatever its form.

This human disaster waiting to happen is another symptom of overpopulation and needless breeding, which only creates misery, poverty, terror, and ultimately war. The other symptom, is the greed of the USA, which fuels its need to use up 60% of the earth’s resources whilst leaving others with nothing, it is the very success of America which may one day be its ultimate undoing. 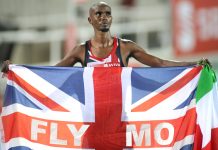 No! Mo is Not Mo No More