Analysing the current socialist media push in America  to repeal the Second Amendment is a sad affair. Here we have the networks on 24 hour shifts pushing out anti-gun propaganda on a constant loop, that is frankly tiresome and old. Then we have the university students, indoctrinated by their Marxist professors, and to top it all off, there’s the tech companies and social media effect where paid Soros shills as well as Chinese globalist operatives constantly bleed out the anti-second amendment narrative.

How do you destabilise a country from within? Divide it of course, and this is what China along with Russia are trying to do. Consider the fact, would you want a fully armed up population against you in any invasion? In Switzerland, it is mandatory that every citizen is armed, and this provides a good incentive to not invade.

The collective moaning and sulking is not only tiresome to watch, but pitiful. It is however a technique used time and time again to change the views of the masses who are targeted.

Amongst the useless marches and lie-ins, nothing is achieved. No gun legislation will ever be achieved by peaceful means in the U.S, so these misguided idiots are rallying just for the sake of rallying. Why not make it a day out in Washington D.C, see the sights, buy that smelly hotdog, then jump on the bandwagon for a few hours listening to communist speakers rally the useless troops?

After the Obama Marxist reign, American socialists are even more of a joke, and to see them so triggered is proof that the majority are very easily controlled by their controllers.

Most of the protesters who shout for the ban of the AR-15 do not even know that it is a semi-automatic (i.e. it can only make one shot at a time). Fully automatic AR-15s are now banned, but this passes by the deranged ill informed protesters who hold their placards up simply to feel like they are part of a crowd. If they knew they were marching for China, maybe they would think again, however many would probably appreciate the communist sentiment.

Similar to sheep and lemmings, the socialists calling for the repeal of the Second Amendment right to bear arms, are following a mantra they simply do not understand, and they are completely clueless as to who is pulling the strings behind the scenes.

First of all, banning guns does nothing, because then you have illegal weapons, and the trade for those will increase exponentially. Much like the drug trade, if one bans something, it gains value. Traffickers are begging for gun control, because that means they will have sole distribution rights. One only has to look at Prohibition in the 1920s. The Mafia made billions in today’s money after alcohol was banned in the United States for a period of time.

Secondly, why stop at guns? Cars kill, knives kill and if you do it right so can a ballpoint pen. Do you want these things banned too?

Thirdly, trying to take away a real Americans’ gun is akin to taking away their right to defend themselves or their families. This right is so ingrained in American society and culture that it will take a civil war to achieve.

Naturally, the first people who will be shot in an another American civil war will be the dweebs who don’t like guns and protested against them. What do you think will happen when every gun toting American suddenly wakes up to what is happening? It’s gonna be trigger time.

A lot of Americans are positively itching for the gun grab to happen, because they know  where the unarmed anti-gun people live.

Civil war would be like hunting season all over again, except this time substitute the jack rabbit for the Hogg stooge and his brainwashed commie compatriots. Looting, fucking, shooting, and cold blooded murder, the whole shithouse will go up in flames overnight. Like lighting a match under a firework factory, astronauts will be able to watch the whole shooting spree from the space station all the way up there in orbit.

As for the U.K, banning guns was no big deal simply because it never had a gun culture ingrained as much as Americans. The docile British are so well controlled that they happily pay as much tax as possible without even complaining. In America, that just would not stand, and the people would make things happen one way or another. The exact is opposite in the U.K. where every indignity and non-freedom is accepted willingly by the populace without so much as a whimper. 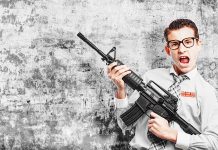